If we were police officers, we’d have loved responding to this call! 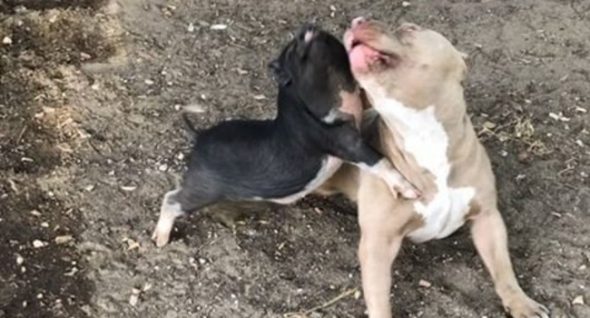 Cops in Fontana, CA, received multiple reports that a pig and a pit bull were running happily wild and loose in a residential neighborhood, the Dodo reported recently.

They were a little tuckered out by the time the police finally showed but, said the officers, although it wasn’t immediately clear where they came from, it WAS clear that they were the best of friends.

Pit Bull Apollo knew their adventure had come to an end when he saw the cops, but Grizzly the pig made the officers work for it!

“Catching Grizzly was not as easy as the animal service officers had thought,” police officials wrote in their statement. “He had fun playing catch me if you can.” 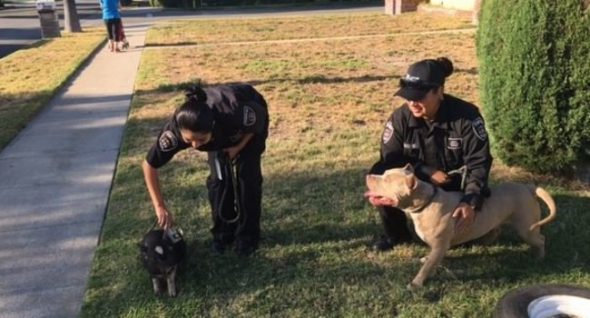 Eventually, though, even Grizzly wound up in police custody and because Apollo had a microchip, they were able to identify the pair’s owner, Michelle Aviña, who lives just a few blocks from where the two were found. She had been very worried.

“Someone left our side gate open and they walked out,” Aviña told The Dodo. “Usually they’ll stay in the yard, but I think they were feeling adventurous that morning.”

Aviña said that the 6-month-old pig and 2-year-old pit bull are inseparable.

“They eat together, sleep together, dig holes together,” Aviña said. “Wherever Apollo goes, Grizzly is right behind him.”

The family loves their pets very much and their brief time on the run taught them a valuable lesson about keeping things more secure in the yard. They love that their neighbors appreciate the very real affection between the animals, particularly in the face of common pit bull stereotypes.

“Who would ever think, right? A ‘vicious’ pit bull and a pig.” Aviña said. “But they’re best buds.”