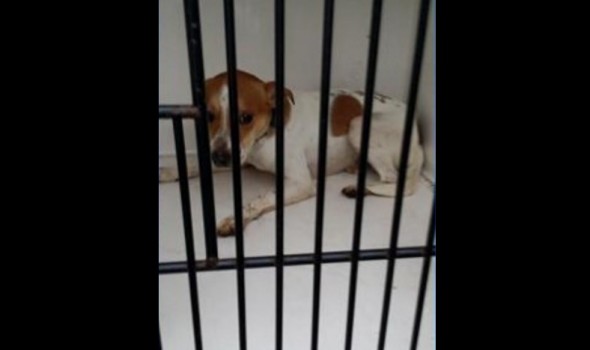 In Louisville, Kentucky at the Veranda at Norton Commons apartments, animal services came cross a report of a dog found in the trash compactor.  The dog had a few scrapes and bruises, but otherwise was in good health.  The Metro Animal Services of Louisville is now seeking help in finding the dog’s humans, or the people responsible for putting the dog in there.

The dog was discovered by a maintenance worker at the apartments.  He went to turn on the trash compactor, but it wouldn’t start up.  Upon inspection of the compactor, Troy Kennon said that he saw a dog cage that appeared to be empty.  He soon realized that it wasn’t, when the dog poked his head out.

Kennon knew it wasn’t one of the dogs that belongs with any of the people living in the complex.  He’s worked there for a while, and says that he’s familiar with all of the dogs living there.  This was one he’d never seen before.

Leslie Hawk with Metro Animal Services of Louisville says the search for the dog’s humans is now on.  He didn’t have a microchip on him when he was brought into their shelter, nor any identification tags.  So as for now, it’s unknown if the dog is missing, had been stolen, or (hopefully not) was put into the compactor by his family on purpose.