The Palm Beach County Sheriff’s office had a rather interesting call recently. “Our Deputies in Lake Worth Beach came to the help of someone screaming for help. Hilarity ensued.”

The police were happy to learn that the report was actually a false alarm. The Palm Beach County Sheriff’s office was contacted by a neighbor who was concerned when they heard a woman nearby calling for help. When the police arrived at the home, they found that it was just a pet parrot who was loudly calling out and screaming.

“Our Deputies in Lake Worth Beach came to the help of someone screaming for help. Hilarity ensued,” the Palm Beach County Sheriff’s Office wrote on Facebook, alongside a video of the encounter.

The video was recorded on a Ring camera. It shows a man working outside on a car with what sounded like a woman’s voice screaming from elsewhere, “let me out!” 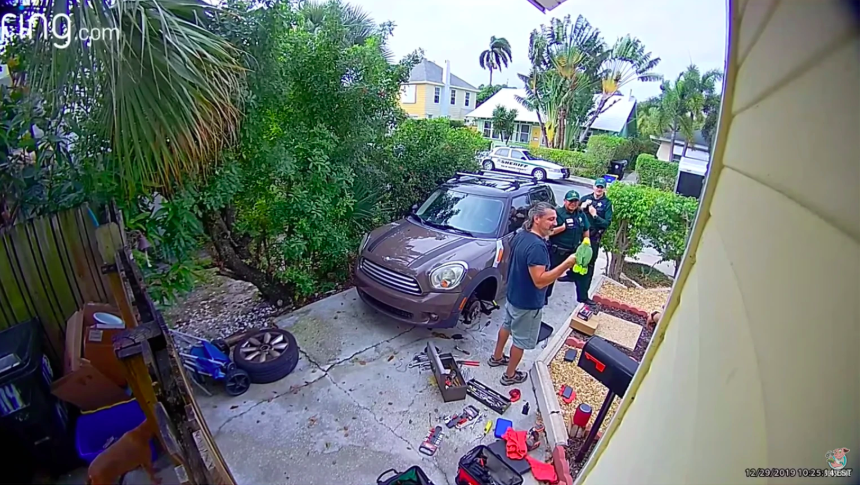 “I was changing the brakes on my wife’s car and had my 40-year-old parrot, Rambo, on his outside perch where he sings and talks,” the homeowner wrote in a caption posted alongside the video. “Sometime later four police officers showed up saying a neighbor called because she heard a woman screaming for help. I promptly introduced the officers to Rambo and we all had a good laugh.”

When the police arrived, you can hear the man calling for Rambo before disappearing and returning with a parrot on his arm. The parrot then said hello to the police.

Everyone had a good laugh and the neighbor who called in the report was informed what was really taking place.

“Afterward, I also introduced Rambo to the neighbor who called in the screaming. She too had a good laugh,” the homeowner added. “Sometimes Rambo yells ‘help, help, let me out.’ Something I taught him when I was a kid and Rambo lived in a cage.”