On Oct. 26, 2015, police officer Fernando Zurita from Arica, Chile, was directing traffic when he witnessed a vehicle hit a dog and then take off to avoid helping or acknowledging what he had done. Thanks to the officer, the runaway driver was apprehended and paid all medical expenses for the injured dog. 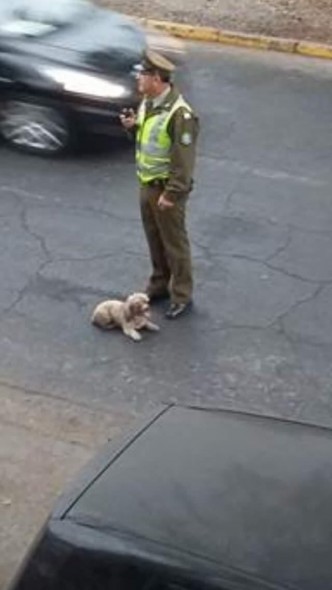 Zurita was standing on the roadway when he saw something small flying and landing near him. The officer saw a car speed away but before chasing the vehicle, the heroic police man went to take a look at the white object that bounced not too far away.

What landed on the road was not a piece of garbage, it was a white Poodle. After verifying the dog was alive, the officer chased after the driver. According to PubliMetro, minutes later the police officer stopped the man and forced the animal abuser and traffic felon to take the dog to a vet.

Zutira not only followed the man to the vet clinic, he mad sure the driver paid for all of the dog’s medical costs.

This police officer is a true hero and a sample to follow. The dog made a full recover