Gremlin the pit bull not only wears them, she’s been thriving since she got them!

The sweet pup was believed to be about 4 years old when she was rescued from a dog-fighting operation. That was seven years ago. And although she’s been safe and loved since then, she’s endured a litany of health problems: cancer, irritable bowel syndrome and a blood disease called babesia, just to name a few.

But amid all that, this lovable girl has also become a certified therapy dog and herself inspired her humans — Chris and Mariesa Hughes — to rescuing ailing senior dogs.

The couple are the founders of the Mr. Mo Project, an upstate New York-based nonprofit that helps save these dogs from shelters and help connect them with “fospice” families — people who will give them loving, forever homes in which they can live out their days.

Gremlin’s eyesight has been poor for quite some time. About a year and a half ago, her mom and dad noticed that burgeoning cataracts were compromising her even further. A vet recommended surgery, but soon after, dangerous pressure built up behind Gremlin’s right eye — causing permanent blindness, but even worse: lots of pain.

She was treated and that was alleviated, but she still couldn’t see very well. She is far-sighted, so while she can readily spot something across the street, up close, she’d often bump into furniture and other things, startling herself. She began to avoid dogs and people alike.

“That was the worst. You don’t want to go to love on your dog and have her be absolutely scared to death,” Mariesa Hughes told TODAY. “Her quality of life was suffering, and we really considered her happiness.” 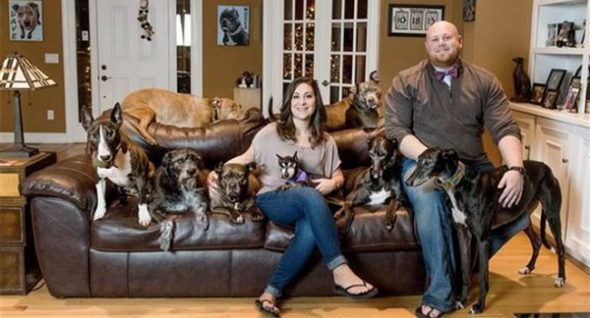 They looked for a veterinarian who could fit Gremlin for glasses (these are relatively common and often called “Doggles”) before they decided to try contact lenses.

“[Our dogs] are our family and we have made a promise to them to give them the best life we can,” said Hughes.

It was Gremlin’s veterinary ophthalmologist, Dr. Petra Lackner, who had the idea that contact lenses might help.

Contact lenses for animals isn’t a new idea, though they have received more press for their ability to help captive zoo animals. They can, however, be prescribed to pets, as well.

Lackner had never prescribed contacts for a dog to correct vision before, though she’d employed them “as a bandage for dogs with eye injuries,” she said.

The Hughes family thought it was worth a shot.

It was about a month ago that Gremlin had her first lens put in. Lackner saw a huge change immediately. It was like the dog was “waking up from a daze,” she said. “I was thrilled.”

Lackner expects to recommend contacts for more patients in the future, given how well Gremlin is doing.

The contacts can be left in for up to a month, but Gremlin seems to prefer having hers changed out about once a week. So that’s what the Hugheses are doing now. They’ve gotten adept at putting them in, and she doesn’t seem to mind .

As soon as the contacts go in, “she kisses us, paws at us to pet her. She is happier,” Mariesa Hughes said.

She says Gremlin has more energy, and is more sociable, that she is once again enjoying her life.

“The best thing, though, the defining moment, was when she saw herself in the bottom of the door. You know the part where there is a little mirror-like kick plate?” Hughes said. “She lay down in front of it and just stared at herself. It was amazing.”