Freedom is such a simple concept. It’s something that every creature deserves. And for this Shiba Inu pup named Mary, freedom is something she never knew. She, along with the six other dogs that were rescued with her, lived their lives in cages. They never knew what love was, let alone freedom.

Mary and her furry friends were found at a meat market in South Korea, where they were being raised for slaughter. Thankfully, before anything could happen, Aniband stepped in. Aniband is an animal rescue organization based in Korea. Their mission is to save the pups being raised for consumption and shed light on this issue in hopes of ending the practice of breeding dogs for meat. Aniband has saved hundreds of pups from facing the same fate that Mary and her friends had been about to face.

Once removed from the dog meat market and brought to safety, Aniband sent Mary and six other pups to San Francisco where they were given their shot at freedom. In San Francisco, Mary was able to take her first cage free steps! She was given her first bath and shown the love she had always deserved. 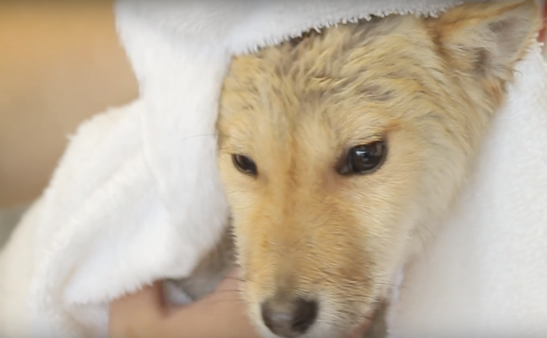 And after just three weeks of living in America, Mary found her happily ever after in the form of her very own forever home. She found a family, one that has given her all the love and affection that she could ever want. And in her new home, she was finally given the freedom to be puppy she was always meant to be!