A puppy who was discovered with painfully swollen paws, because rubber bands were secured around his feet, has recovered and he is ready for a home. The six-week-old pup, dubbed Little Foot, was taken in by the Arizona Humane Society after being found by a good Samaritan.

At the time he was found, his feet were horribly swollen and damaged from the rubber bands and the lack of circulation…but now he is feeling better and the time has come for him to join a family.

On February 28, the animal shelter informed Facebook followers that the now 10-week-old pup was ready for adoption:

For those of you who have been following along with Little Foot’s journey, we can’t thank you enough for your support – for both him and for AHS’ teams who have cared for him every step of the way. Without you, Little Foot would not have the second chance he deserves! 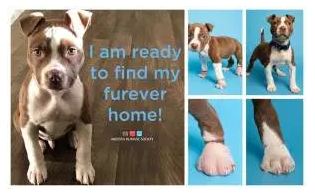 Prior article about Little Foot at this link.

Find the Arizona Humane Society Facebook page at this link.