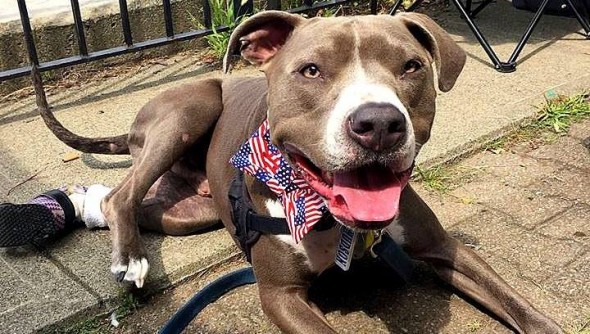 Hudson’s life has been an amazing story, and by all accounts is a living miracle.  After being found tied to train tracks as a puppy, he was rescued and trained as a therapy dog.  Today, he is honored as Therapy Dog of the Year.

On Saturday, Hudson was honored by the American Humane Society at its annual Hero Dog Awards ceremony.  He received the award for his work as a therapy dog and spreading the word about animal cruelty awareness in the Albany, New York area. 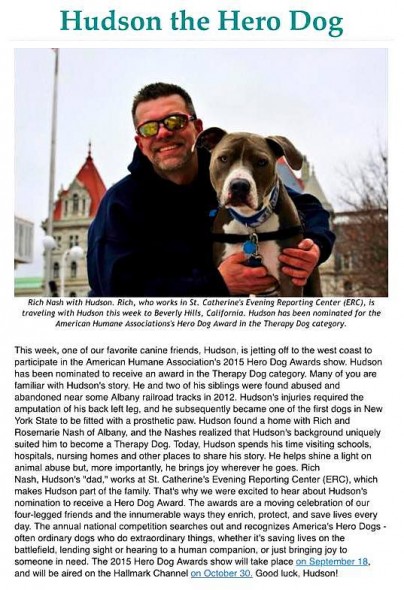 “The way the community has been with us, it really touches my heart,” Hudson’s human Richard Nash said Sunday in a news interview.  “I’m so blessed and thankful so many wonderful people are out there who want to see others succeed.  That’s what they’ve done for Hudson.  A little dog down on his luck and left for dead became, at just three years old, he’s the American Humane Association’s top therapy dog of the year.”

Judges for the Humane Society event said, “He (Hudson) teaches children and everyone they meet that just because you are different, you are still special in your own ‘Wooftastic’ way.  Hudson the Railroad Puppy brings smiles to everyone he meets and is changing hearts and minds about the pit bull breed one at a time.” 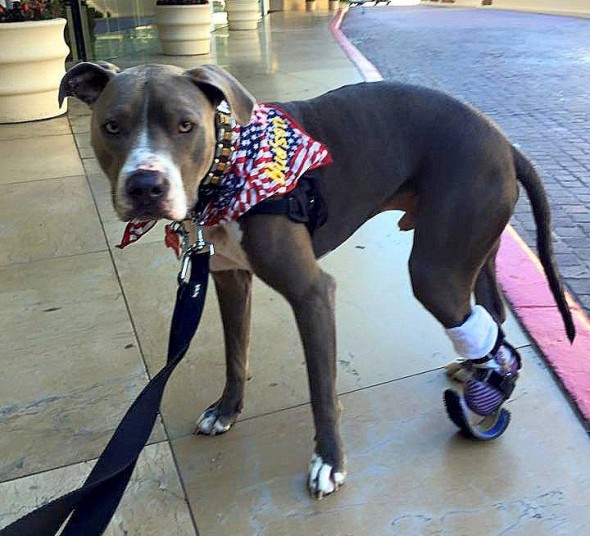 At just three weeks of age, Hudson was found with with three other pit bull puppies that were injured, and tied to railroad tracks in Albany.  Luckily, railroad workers saw the dogs before something even worse happened to them.  All three dogs were badly dehydrated, malnourished, hypoglycemic and had an infection when they were brought to a humane society shelter.

It was discovered that an Albany man, Anthony Walker, was responsible for the cruel and heartless act.  He was arrested and convicted on charges of animal cruelty.  He got six months in jail, followed by five years of probation and many, many fines. 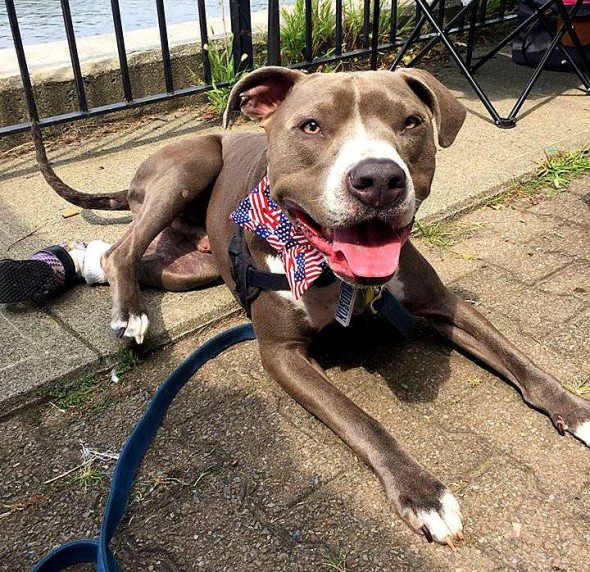 “Just him being there (as a therapy dog) and seeing how happy he is and how well he can walk on his prosthetic and the things he can do even though he has a disability, I believe it gives people the confidence and courage to be able to say, ‘I can do it!  If this little 65-pound dog can do it, I think I can do it!’” said Nash.  “It’s not every day you get to walk the red carpet and you’re the star.  To me, I’m just a kid who grew up in Troy, I live in Schodack now.  To be flown to Beverly Hills and to have stars standing in line (waiting to get in) and you’re the one on the red carpet.  It’s just amazing.”