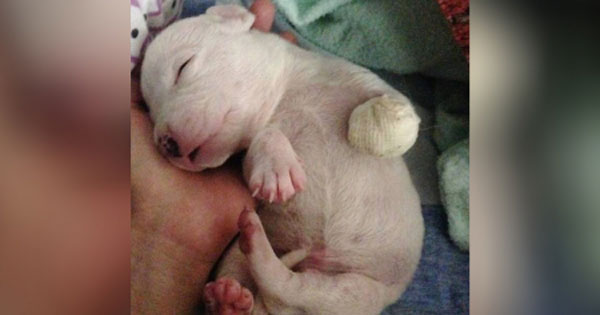 It is strange and beyond comprehension as to why would this puppy’s own mother didn’t like him and that she tried to eat him. This puppy was just a week old when he had to face that and he got rescued somehow to get a second chance in life. As a result, he was taken away from his cruel mother and this was just a new start for him in every possible way.

It breaks heart to see such an adorable puppy with such three paws as one was eaten by his own mother. Miraculously and to everyone’s surprise, he was adopted by two adorable cats and it seemed like that cat understood that the cute baby dog needed a lot of love and attention. The cats were with the puppy all the time and even when his human mother changed his bandage and fed him. They always ended up cuddling him and Nicolas the puppy was always under protection by the cats and loved their company.