When three hikers came across a dog lost in an Australian national park, they knew they had to save her.  But she was exhausted from trying to stay alive in deep water, and could no longer move.  The trio refused to give up on her, and after numerous attempts, finally figured out a clever way to get her out of the densely-packed forest.  But wait, this story gets even better…

This comes from a post by dangerm0use on imgur: 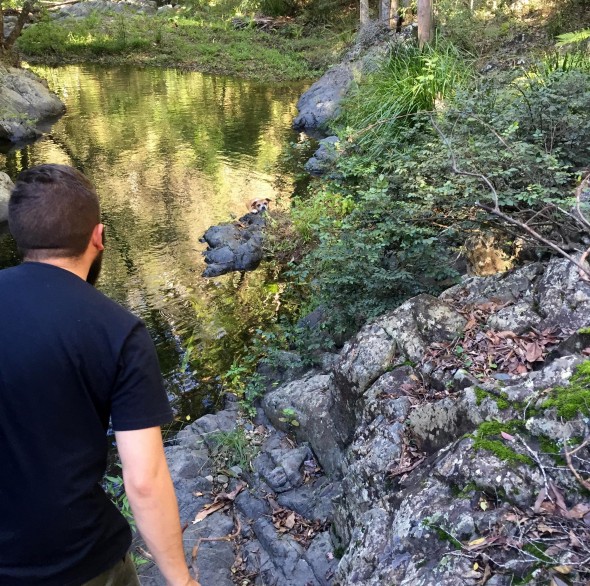 My husband and I took my dad to see some rock pools in a fairly secluded section of Mt Glorious National Park. As we walked along the creek bed, we noticed a disturbance in one of the deep pools ahead. Thinking it might be a roo or a platypus, we approached quietly, only to see this forlorn little face looking back. It was honestly the saddest sight. 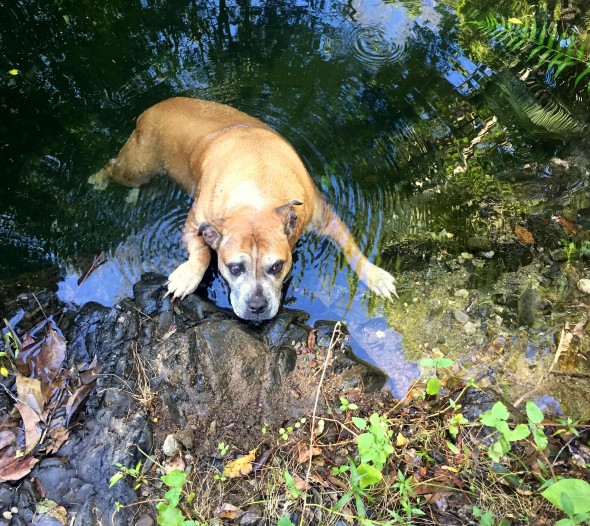 We approached cautiously, not knowing whether this was a domesticated or wild dog. Either way, we couldn’t leave it there in the freezing water. It was completely exhausted from its attempts to struggle out of the deep section it had fallen into, and there’s no way it would’ve survived the night. We erred on the side of caution and armed ourselves with a BFS (big f*cking stick), just in case it wanted to defend itself when we pulled it out of the water. We gently looped a rope around its head/shoulders, and with a slight struggle, dragged it out onto the rocks. The dog wasn’t aggressive at all, and in fact very timidly lumbered away from us, up the bank and into the thick lantana beside the pool. As it turned away from us, we saw that she was a desexed female – at some stage she must’ve been domesticated. 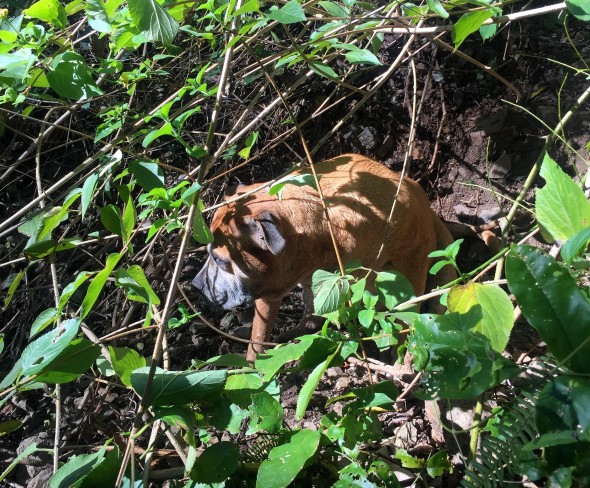 We figured if she’d been someone’s pet, there was a chance she had been dumped or lost. Even though she wasn’t interested in coming to us, we knew again that we couldn’t leave her there. She was in a completely inhospitable section of bush, in a gully with cliff face and hectares of national park on one side, and a scrubby, rocky, unscaleable bank up to a busy road on the other. There were also no houses within at least a 5KM radius, and no obvious way for her to make her own way out of the gully. We saw her podgy little rump disappear into the lantana, giving us no other option than to wade in after her. Because the scrub was so thick we lost sight of her. Occasionally we could hear her bashing her way up the bank, and eventually we spotted her around 10 meters up, laying low in the thick undergrowth. We approached from 3 sides, to try to keep her from escaping again. When we crept up to her hiding spot, we saw that she’d made herself a little dugout in the bank, and she’d even made a tunnel through the lantana, down to the waterhole. 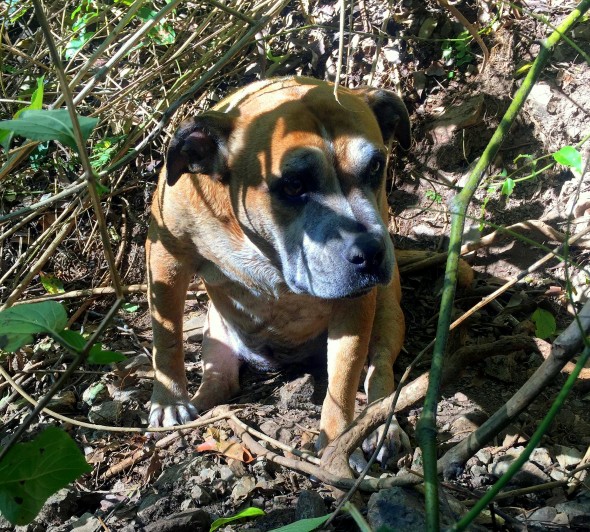 At this stage, we still weren’t sure if she’d let us get close to her, so we sat with her for a little while to see how she’d respond. She was very dejected, and obviously still exhausted. I snapped away the lantana from her little nest, and gradually got in closer, letting her get used to us being there. She was still apprehensive, but not aggressive, so after a while I took a chance and gave her a scratch on the head… and she rewarded me with a lick on the hand. Despite obviously having been camped there for at least a few days, we noted that our little companion wasn’t exactly lacking in mass, leading us to dub her Miss Piggy. We spent a bit more time getting acquainted with Miss Piggy, while we started to hatch a plan to get her out. 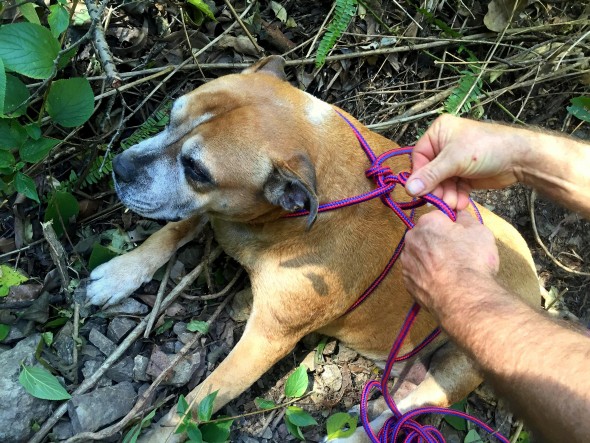 The prospect of coaxing her back along the creek bed seemed pretty poor, given how tired and rotund she was, and given the difficulty of getting her round waterholes and over large rocks. We had ropes with us for climbing down waterfalls, and so figured that if we could tie her up securely, we might be able to make a run for the road above us. We created a makeshift harness with non-slip knots, and tried to coax Miss Piggy to slowly climb through the scrub and loose rocks with us. She (predictably) wasn’t overly keen on that, so we set about carrying/nudging her along – one person leading her and another pushing/carrying her from behind. We secured the long end of rope to some trees above, to prevent her from slipping down the bank, and tried to make some slow progress. 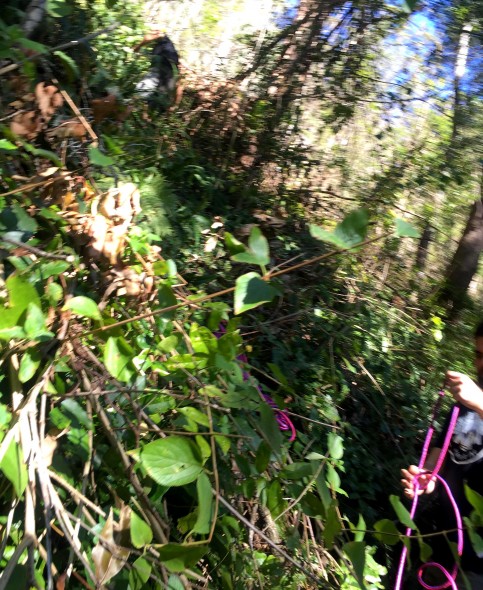 Potato action pic of the bank. The main issue was that aside from the lantana and loose rocks under foot, the bank was extremely steep, and laced with vine. Each of us were becoming hitched up on the vines, and Miss Piggy was making little to no progress. We were working on getting her up over a small rock ledge, and as I gave her a push, she pulled off a full-body wriggle manoeuvre, completely slipping her harness. She made a break for her pathway under the lantana, with me crashing after her, trying to prevent her from escaping. The only way I could stop her was to get in front of her and head her off before she got to open ground. With her escape plan thwarted, she slumped down into the undergrowth and resumed her state as an immovable object. 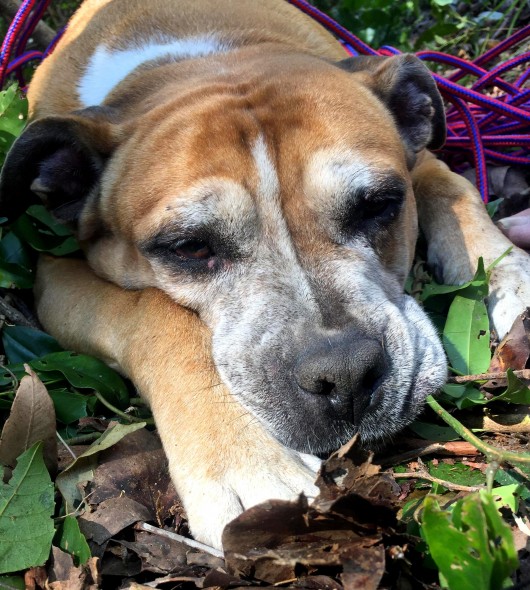 Miss Piggy was understandably frightened and worn out, so we sat a bit longer trying to give her some time to calm down, with lots of pats and reassurance. 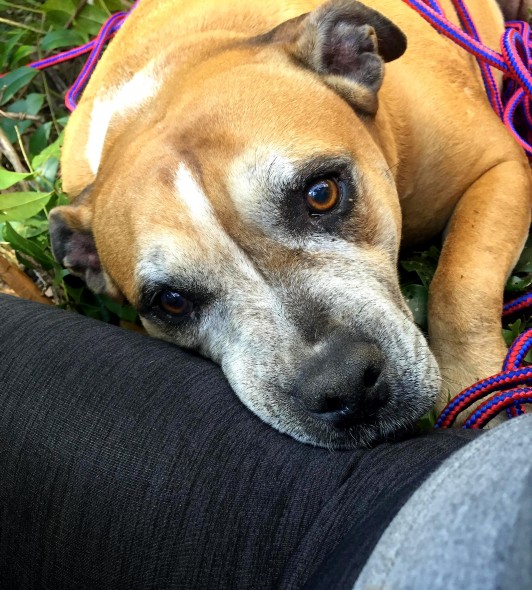 The little sweetie showed her appreciation of our patience by wriggling over to me and resting her head on my leg. I hadn’t wanted to be too familiar with her to this point, but she gave me the go ahead to give her a reassuring cuddle. It was becoming pretty obvious that she wouldn’t be able to make it up the bank unless we carried her, and so we were throwing around options for a harness and hammock set-up, using towels and ropes. My husband had a brainwave, remembering that we had a large canvas bag in our car (15 mins walk back up the creek). We figured that if we could get her into the bag, we could MacGyver together some apparatus to transport her out. 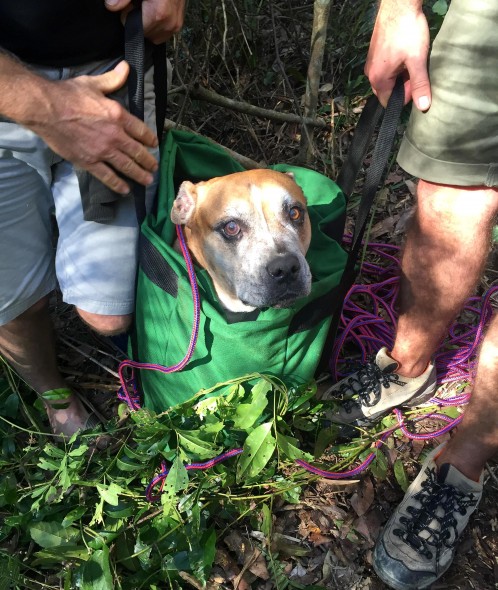 Our first measure of success was that she fit into the bag. 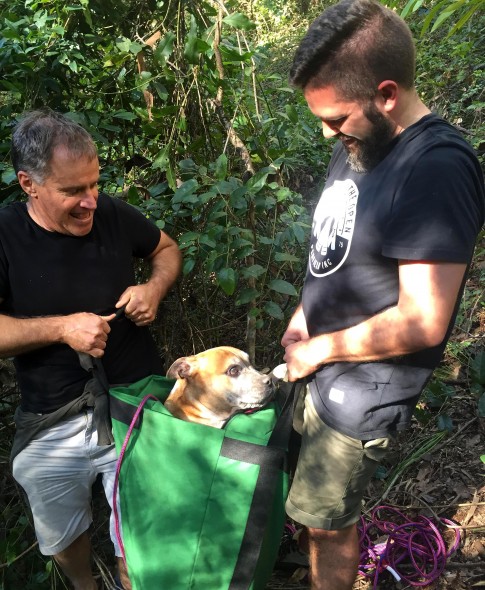