Bretagne was just 2 and newly certified as a FEMA Search and Rescue Dog when she and owner/handler Denise Corliss were deployed to the World Trade Center following the attacks on Sept. 11, 2001. 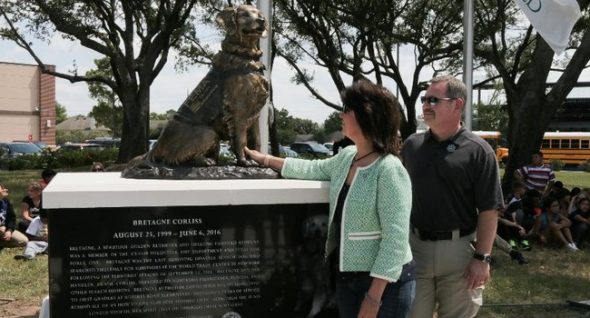 The pair worked 12-hour shifts for 10 exhausting and frustrating days. Though the dogs found much in the way of human remains, no survivors were found.

Back in June, Bretagne, suffering from kidney failure, was peacefully euthanized at age 16 last June, the last surviving 9/11 search dog and yesterday, a life-sized statue of her — young, strong and in her prime — was unveiled in the town of Cypress, to honor her service and that of dogs like her.

Corliss, who was recently deployed on Hurricane Harvey-related missions with her new canine partner, Taser, was on hand for the unveiling and ceremony.

During her long career, the golden retriever responded — alongside Corliss — to nearly a dozen disasters, including Hurricanes Katrina, Rick and Ivan. She retired from service at 9 but continued to work as an ambassador for her local fire department and a reading assistance dog at an elementary school near her home.

Corliss and Bretagne, like so many others, worked innumerable hours to serve the community in the wake of disasters, all of it as unpaid volunteers.

This video from last June honors her service: