With his umbilical cord wrapped three times around his neck, Johnny was born with Quadriplegic Cerebral Palsy. The lack of oxygen to his brain caused permanent damage, and breathing complications make it impossible for him to sit up for too long. With no control over his upper or lower extremities, Johnny suffers painful muscle spasms and spends his life lying in bed.

Despite his disabilities, Johnny has always been aware of his surroundings. The frontal lobe of his brain is mostly undamaged, and he’s a curious, smart, and emotional nine-year-old boy. 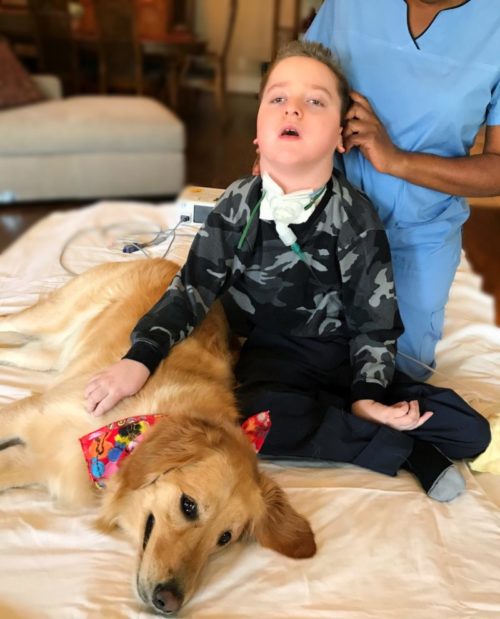 As he grew older, his parents, Jeff Finn and Katherine Scardasis-Finn, realized their son was missing out on life. He didn’t go to school, knew no children his own age, and rarely got the opportunity to have fun. He needed a friend, and a dog seemed like the right solution. Katherine told iHeartdogs,

“I knew a dog would bring joy to Johnny—he’s a boy! Every boy wants a dog!”

Having grown up rescuing animals, Katherine turned toward the local organization, Golden Beginnings Golden Retriever Rescue. She says Johnny has taught her “not to judge the outside of a being,” and she was ready to take in a rescue dog in need of a loving family. She was introduced to Lexi, a five-month-old Golden Retriever found starving on the side of the road. She had been infested with fleas and obviously abandoned, but her rescuers and foster family instantly recognized her intelligence and compassion.

Katherine took an immediate liking to Lexi, and she decided to introduce the dog to Johnny. When she brought Lexi home, the young puppy acted as any excited Golden Retriever would. She ran around the house exploring, but when she met Johnny, she instantly changed. She was interested in the boy in a way that was neither overly excited or anxious. She greeted him with calm compassion, and in a moment, Johnny had made his first friend.

Now two years since they first met, Johnny and Lexi are inseparable. Without any formal training—not even obedience class—Lexi took on the role of Johnny’s caretaker. She watches over her boy with genuine concern on her face. Johnny needs regular physical therapy to keep his muscles from deteriorating, and Lexi stays by his side during each session. The stretches are excruciatingly painful, and before Lexi, Johnny couldn’t get through the ordeal without crying. But with his best friend there to comfort him, he is relaxed and calm.

Lexi is there for Johnny for medical purposes, but more importantly, she’s there for him emotionally. She’s content to cuddle with her boy and watch movies, and when she licks his hand, he laughs so hard the alerts on his medical equipment go off. Her instinctual way of loving Johnny has brought enrichment and meaning to his life in ways his parents only hoped for. Katherine said,

“The two bonded instantly. Lexi gives Johnny Something to look forward to every day. Johnny knows he has a buddy and partner in crime.”

Johnny’s family dynamic changed the day Lexi pranced through the door, and Golden Beginnings GRR was proud to make that happen. To pay it forward, Johnny and Lexi’s story was entered into the annual Petco Foundation Holiday Wishes campaign. Every year the Petco Foundation awards sizable grants to rescue organizations that have stood out with their life-saving efforts. Last  year, the story of Lexi’s adoption earned Golden Beginnings $25,000 to put toward rescuing more animals and facilitating more adoptions. 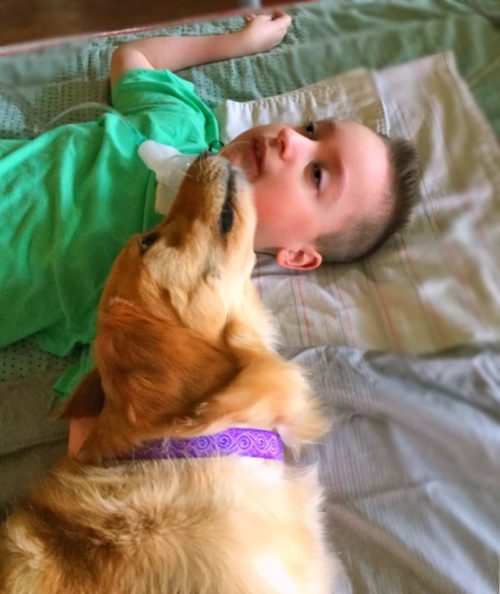 Thanks to Golden Beginnings GRR, the dog that needed a home and the boy that needed a friend have formed a powerful bond. It’s a classic tale of a boy and his dog, but this story goes beyond Johnny’s front door. Lexi will continue being Johnny’s best friend, and she also recently became a certified therapy dog. She’ll spread her special breed of compassion to everyone who needs it, and her family is proud of the work she does both for Johnny and the community.

The 2017 Petco Foundation Holiday Wishes campaign is underway, and the Petco Foundation is once again preparing to award $750,000 to animal welfare organizations dedicated to bringing together people and pets. Visit their website to submit your story before September 30.