Eddie the rescue dog had spent at least a month wandering the streets of Washington on his own after being abandoned. When Carin Brown with Benton County Animal Control finally rescued him, she could tell that he was in rough shape. At first, she thought he had gotten hurt as a stray, but she soon discovered that it was much worse. Poor Eddie had an inoperable tumor, and he only had 6 to 12 months to live. 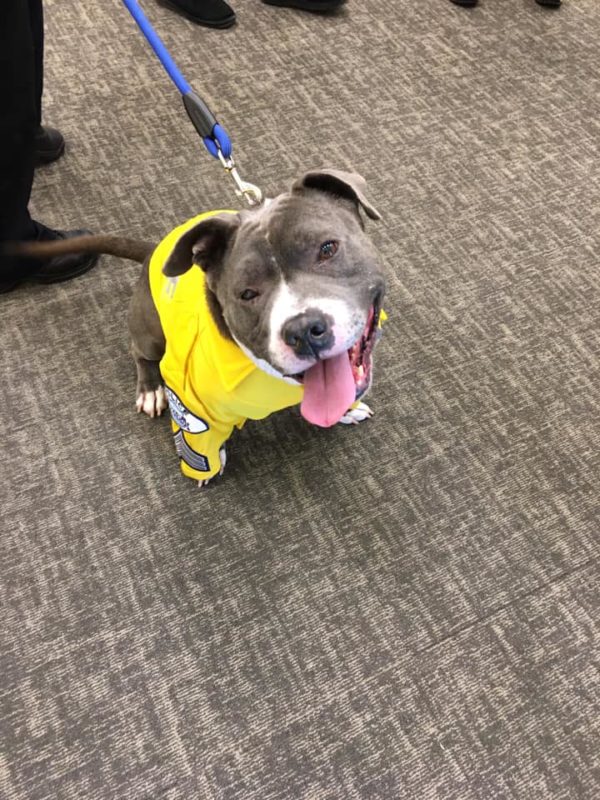 Despite everything, Eddie is still the sweetest, happiest pup. Brown knew that she had to help him in any way possible. So, animal control reached out to Mikey’s Chance Canine Rescue for support. Brown’s friend, Kristi Kesler, also agreed to be Eddie’s foster mom for the rest of his life. She even gave him the cute nickname, “Eddie Spaghetti”.

Since Eddie didn’t have much time left, Kesler knew that she had to make his remaining time worth it. So, she created a bucket list for him. She was determined to make the remainder of his life perfect, but it became even more magical than she expected. 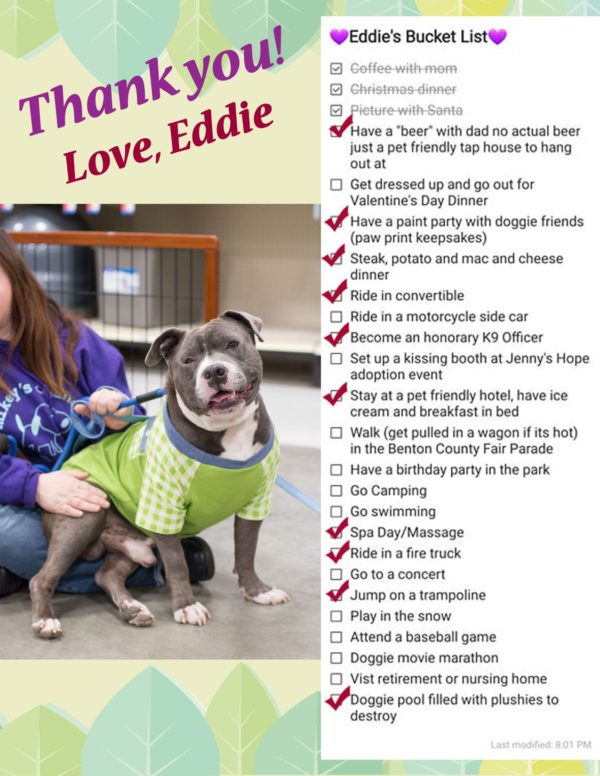 “We will be sad when the time comes but until then we are just going to have a lot of fun with him and make a lot of great memories for everybody,” said Kesler.

Kesler, Mikey’s Chance, and the Pasco Police all worked together to make Eddie’s bucket list come to life. He had plenty of crazy adventures on his list such as taking pictures with Santa, riding in a side car, and running a kissing booth. He’s been crossing them off one by one. 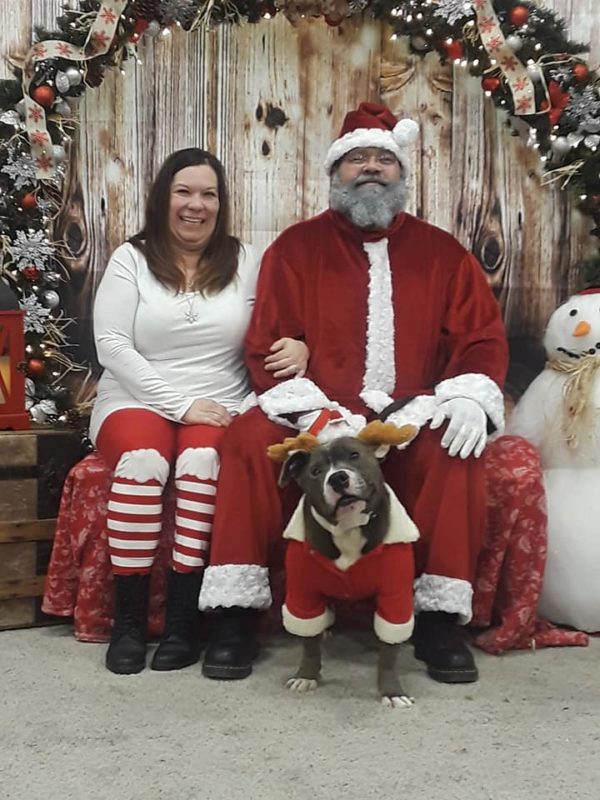 Police K9 for a Day

One of the most important items on Eddie’s bucket list was becoming an honorary police K9. So, Pasco Police let him spend the day as a K9 officer. Eddie promised to ‘apprehend bad guys, search out narcotics, and put people in jail’. He even received his own custom-made police uniform that was complete with real police patches. 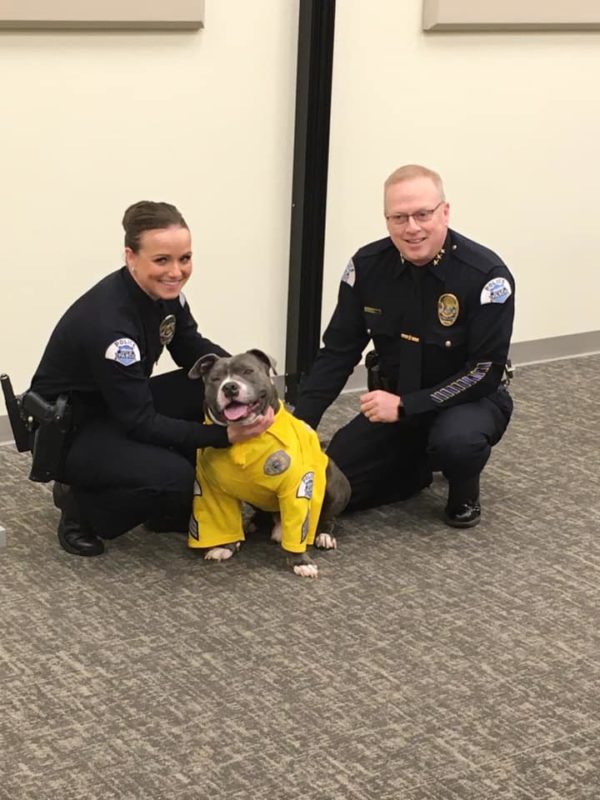 Then, Eddie got to spend all day living the exciting life of a police K9. He visited multiple locations including the 9-1-1 center and a donut shop. He even got to play in a pool full of stuffed animals after his workday was over.

“I thought maybe he might get his picture taken with an officer in a car, I thought maybe if he were lucky he might go for a car ride, but I never dreamed it would be this big for him,” said Kesler.

Eddie had a blast spending time with the police officers and getting the love he deserves. However, his bucket list doesn’t stop there. Lots of community members have been stepping forward to help him check even more items off his list. 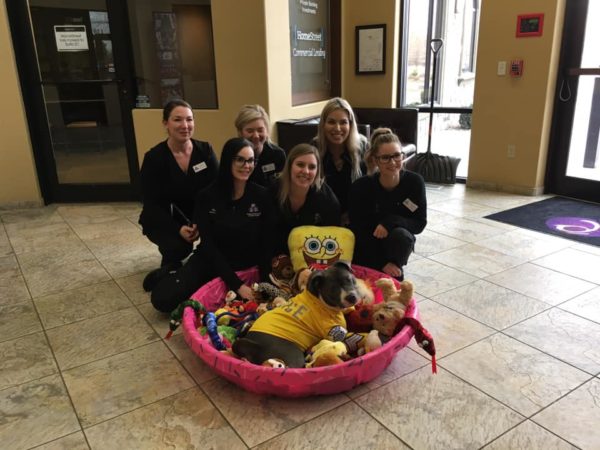 “It’s amazing … in this little tiny community that so many people have said, you know, ‘He’s worth it, he’s worth the chance,’” said Brown.

Eddie’s story has inspired many people. He might not have a long life left, but his loved ones have helped him make the most of his remaining time. Hopefully his story will encourage more people to be kind and help dogs like Eddie in the future. No matter the circumstances, every dog is worth it. 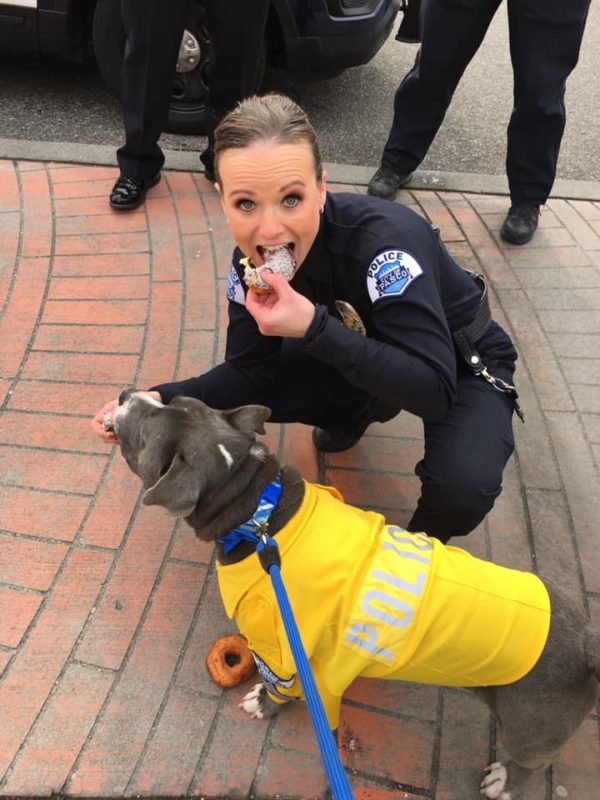