According to a recent story on a Texas news channel, the southern part of state is suffering from an overpopulation of stray dogs.  One county reported an intake of 125 dogs a day.

While many dogs enter the shelter system daily, some continue to go unnoticed as they roam the streets. Most people look upon these animals as a nuisance and remain apathetic to their plight. Morgan, a black and white pit mix had been roaming the streets of Carthage, Texas for many months; maybe even a year as indicated by his paw pads being in rough shape.

But Morgan got lucky one day when Carthage City resident Fernanda Machado saw him run in front of her truck while she was driving with a friend. Fernanda knew she wanted to help this dog and left her vehicle to pursue him on foot.  It took her twenty minutes to finally catch him as he would not let her get close to him. She was finally able to corner him in a carport and get a leash on him.

Upon closer inspection, she could see this poor boy had lived a horrible life. His body was a map of abuse. He was very skinny, and his face was full of cuts.  Fernanda and her friend rushed the dog to a vet.  During the examination it was discovered he had missing teeth on both sides of his mouth, a split canine, most likely the result of having to eat rocks to survive. Morgan also had two lacerations on each side of his mouth. One was quite deep but healed and may have been caused intentionally or if he got stuck on some wire. He had so many infections from his many wounds, including a piece missing from one of his ears that he needed to first be treated with antibiotics for a week before he could be vaccinated.

Thankfully, the infections were under control, so he could be vaccinated and treated for heart-worm. His first vet visit was paid for by a non profit known as Gifting for Rescued Paws through their Ryder Program to help homeless dogs.

When the vet went to neuter Morgan, more horrors of what this dog had endured were exposed.  One of his testicles was in such bad shape and filled with scar tissue from being beaten that it took two vets to neuter him.

Because Fernanda already has four dogs of her own, she could not take him home with her. The vet allowed her to board Morgan at their facility while she tries to find placement for him. Morgan is still in boarding at Animal Medical Center in Carthage, Texas.  Despite all he has been through, this boy has a constant smile on his face. He loves treats and toys and people. He knows how to sit, shake hands and lie down.  He is very eager to do tricks!

Because of his past abuse and having been attacked by other stray dogs, he is hesitant and selective of other dogs. But in the right hands this behavior can be corrected. Morgan is currently up for adoption or available to go to a reputable rescue for continued care and training. 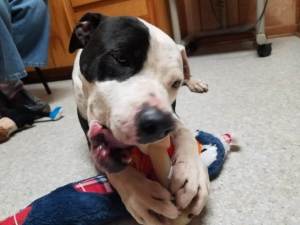 Morgan enjoys his toys and treats

Whoever takes him will need to have experience with this breed and an understanding of his past. This basically translates to whoever takes him needs to be very patient and compassionate and give him lots of love.

There is no adoption fee for Morgan, but a home check is a must along with a vet and reference check.  He has already been failed once so every measure is going to be taken to make sure he does not fall into the wrong hands again.

Transport will be available if it’s the right home for him.