A Connecticut community came together on Thursday to save the life of a dog in need. After a severe storm ripped through the area, a homeowner noticed a sad-looking dog in their yard. They quickly called the local Wolcott Dog Pound, and a rescue team was soon on their way.

When animal control arrived on the scene, the dog (later named Stormy) was terrified of the group of humans approaching her. She ran down the road, and her would-be rescuers eventually lost sight of her. They didn’t give up, however, and they continued to search the area for signs of the frightened dog. Soon enough, they spotted Stormy in a scary predicament. Caught up with panic, the dog entered a storm drain. Thanks to the recent bad weather, the drain was full of fast-moving water, and Stormy was in serious danger of being swept away. 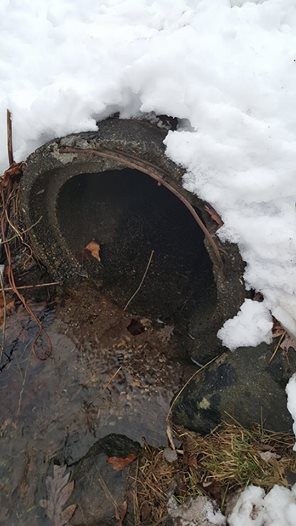 Rescuers knew the storm drain emptied into a nearby reservoir, and they needed to get her out of the pipe before she drowned or was otherwise injured. With help from the local volunteer fire company, rescuers worked for about an hour employing every idea they could think of. Finally, with “some unusual techniques and apparatus,” the animal rescuers were able to pull Stormy out of the drain. She was terrified and tried to get away, but the determined group managed to get her contained and into a warm, safe spot.

Once Stormy was safely in her rescuer’s custody, they were able to get a better look at her. She’s a blue Mastiff who was obviously in rough shape. She was overbred, nervous around people, and severely malnourished. There was also the fear she had hypothermia, and she was rushed to the Watertown Animal Hospital. 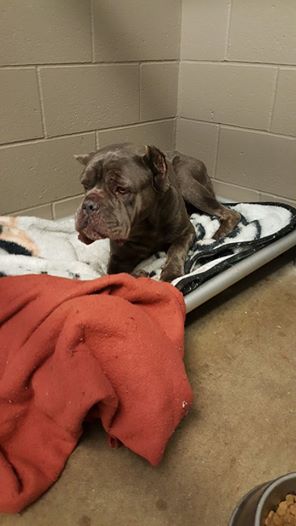 Stormy is now safely with the Walcott Dog Pound. She needs time to rest and decompress from her experience before the shelter moves forward with a possible adoption. In the meantime, they’re looking for any information on where the dog came from and how she came to be on her own during the storm. If anyone recognizes Stormy, they’re asked to contact the Wolcott Dog Pound or call the Wolcott Police Department at (203) 879-1414.