Rhett Barkley is a gorgeous Goldendoodle who has a family that adores him. Since it’s his birthday, his owners wanted to go above and beyond for his present. They figured that Rhett Barkley needed a playmate and they were ready for a second dog. So, why not get him a puppy? And why not make it another Goldendoodle?!

Okay, let’s face it — the puppy was a half for Rhett Barkley and half for the owners. Who doesn’t love a new puppy in the household?

They call Rhett into the room where the Goldendoodle puppy is hiding. He can immediately sense that something exciting is happening. He begins to bark with anticipation. The owner tries to calm him down, so he stays quiet, but Rhett is far too excited to keep quiet. 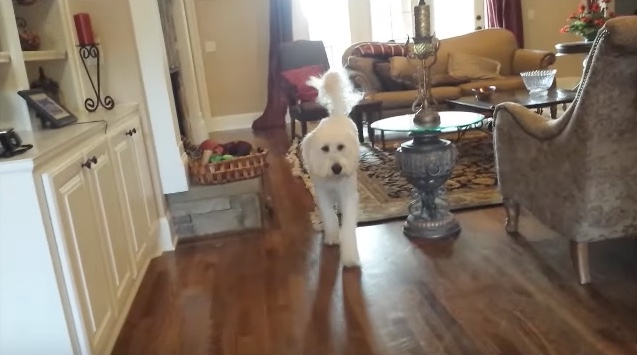 The Goldendoodle notices the box across the room and begins to try and stealthily walk over to it, the wood floors make it a bit difficult for him. Rhett is definitely realizing that there is something curious in the cardboard box.

Rhett gives the new puppy, Scarlett, a sniff but isn’t quite sure what to think of the little furball quite yet.

The Goldendoodle pup is so little that it doesn’t quite know what to make of the Rhett either, but she happily wags her tail as her big brother sizes her up. It was probably a pretty chaotic moment for them both. 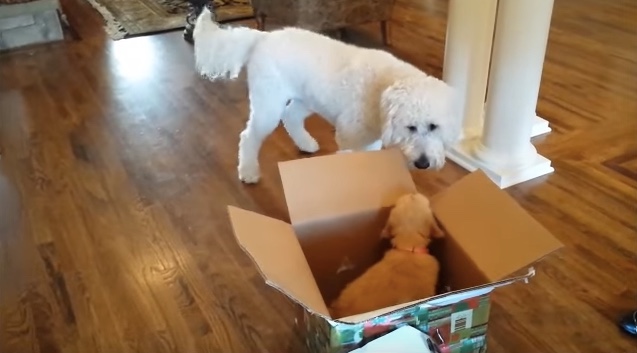 Soon, Scarlett is out of the cardboard box and bouncing around her big brother Rhett. It wasn’t long until they were outside playing on the grass while Rhett runs circles around his little sister. It’s clear that these two are going to be the best of friends in no time.