I needed a buddy for my dog so I went to German Shepherd Rescue in LA. We picked a handsome, 8-month old shepherd who loved any attention you gave him. 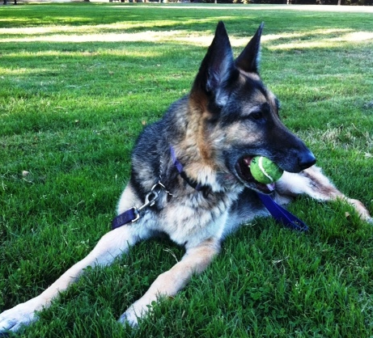 German Shepherd Rescue said they were sure he had been dumped by a breeder in the area. I couldn’t figure out why a breeder would dump what was obviously a pure-bred shepherd, but found out quickly enough.

We went on our first walk, made it less than a block before he lay down. This repeated itself the next few days. A trip to the vet let me know what the breeder obviously had known – at 8 months old this poor puppy had virtually no hips.

By this time I had fallen in love with the goofy, attention-loving dog, so decided we would rebuild him. Two new hips for an 8-month old dog led to a name change, he became RoboDog!