A champion marathon runner reunited a lost dog with his family a year after he went missing.

Esther Atkins, who won first place at the USA Marathon Championships in 2014 was out walking her dog when she saw a stray pit bull “frolicking in a mud puddle” in the park across the street from her house in South Carolina.

Although Atkins’ dog was unfriendly, the gentle Pit Bull followed them home and “waltzed right into my yard” Atkins wrote in her video.

She canvassed the neighborhood and posted pictures of the dog to social media but no one seemed to know whose dog he was.

A few hours later she brought him to the vet who found a microchip but said the data was out of date. But the vet put her in touch with the humane society he was chipped at. 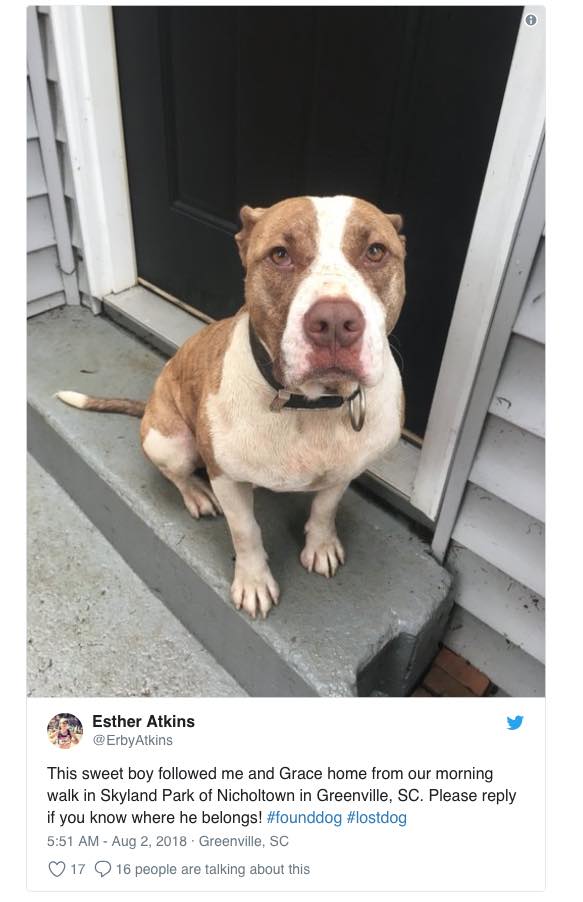 They were able to track down “Rachet’s” family and connect them with her. It turns out Ratchet was 68 miles from home and had been lost for about a year!

Not only that, but Rachet’s family feared he was dead. According to Atkins, Ratchet’s owners had been told by their neighbor that he had killed their dog! They told her that the neighbor was frustrated that Ratchet often ended up in his yard.

They grew suspicious when he couldn’t produce Ratchet’s remains for burial and reported him missing to police. But a year past without word about Ratchet. That was until they were contacted by Atkins.

A day later, Ratchet was about to be reunited with his family, all thanks to Atkins. Ratchet didn’t know it yet but his “heart is about to burst”. As soon as he realized who was there, Ratchet’s tail wouldn’t stop wagging.

Watch Atkins heartwarming video about Ratchet’s amazing rescue and touching reunion with his family in the video below!