Monty’s Dog Beach & Bar opened last year to the delight of dog owners in Crikvenica, Croatia; it is the nation’s only beach bar for dogs.

Alongside frosty beverages and snacks for the paying humans, their furry friends can enjoy special dog-safe beer and pup-friendly ice cream while when they’re not playing in the sand or surf. And last week, bar owners decided to add some fun events to the establishment’s calendar, organizing games where owners and their dogs competed as a team. 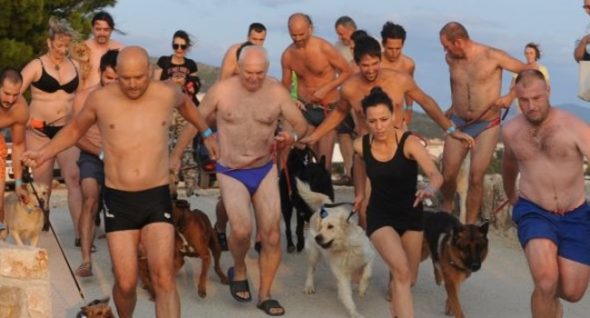 Fifteen human-dog pairs took part in the Saturday portion of “Underdog 2017,” the South China Morning Post reported, with contestants running down the pier, jumping into the water and doing a 100-meter swim to shore. The winner: Nimbus, a 4-year-old Samoyed mix. For his exemplary effort, he and his owner took home a big bag of dog food (and won a weekend stay at a local hotel!)

“We did not prepare. We swim a little bit in the summer. He’s a natural swimmer, when I jump in the water he comes with me and follows me, and this why we won,” his owner, Marin, said.

Sunday’s eating contest was less about the legs and more about the tummy. Participants scarfed down specially made foodstuffs (all safe for pups).

This looks like a blast, don’t you think? Check out this fun video from last year!