Although Gabe only weighs about half of what he should and still needs round-the-clock care, he’s made incredible progress in the days since he was found wandering the streets of Toledo, OH, near death. 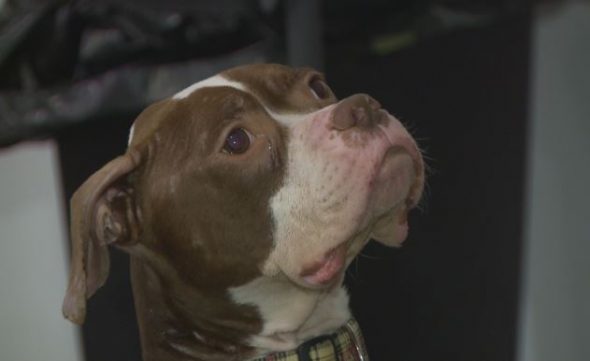 His story, what we know of it, begins and ends (for now) with his time at Lucas County Canine Care and Control, which was his temporary home a few years ago. When he was picked up on the streets last week, that’s where he ended up again. He’s since been transferred to the Lucas County Pit Crew, but LCCC&C Executive Director Jean Keating was horrified to see the condition he was in.

“He scored a 1-2 on a 9 point scale,” Keating told 13abc Action News. “He has muscle wasting and not a stitch of anything other than skin and bone on his body.”

Gabe is being cared for by Robin Rayner, who’s an old friend. The two first met in 2014.

Robin is a volunteer at Lucas County Canine Care and Control; Gabe was one of her favorites. After months at the shelter, he was eventually adopted.

“You can’t help but get emotional when you see him knowing how he was then and how he is now. You wonder how could this happen?”

Keating says they’ve asked Toledo Area Humane Society cruelty investigators to look into the situation. “We would certainly feel better if someone was held accountable, but it doesn’t matter to Gabe. All that matters to him is that he has people who love him. He has a lot of people who love him now.”

Because of his low weight, Gabe gets small meals throughout the day. Putting it back on is a slow process. “When you have as much muscle wasting as Gabe does, it is a long process of nearly starving to death, literally. He’s truly lucky to be alive.”

In true canine fashion, the treatment Gabe has endured hasn’t soured him on loving people. He still has kisses and a wagging tail for anyone — and he enjoys fetch, too.

“He’s definitely coming around . You can see it in his eyes, his eyes are getting brighter.” Gabe’s future is getting brighter too…. We’re very optimistic that that in about six weeks we’ll see the old Gabe again. After that we can get him ready to go up for adoption.”

Keating and Raynor want Toledo-local pet owners with financial challenges to be aware that there is a local pet food bank that gives people free food for their cats and dogs.at the Humane Ohio Clinic on Tremainsville.