At the outset, no one knew who left the scruffy little dog tied to a tree in Lexington County, SC, but when Blanca Anahi Cushman and her cousin happened upon him, they knew they couldn’t sit idly by without helping.

“Free pup,” read the sign left alongside the dog whose leash was tied to a tree behind a local gym. “Name is Scooter. Owner went to jail today.”‘

Cushman took to social media in the hope of getting some help.

“My cousin just found this dog tied to a tree at the back of Muv Fitness West Columbia and we don’t know where to go from here…,” she wrote in a Facebook post. “Clearly the owner is a piece of garbage and left the dog here. It’s getting dark and I don’t want to leave him does anyone have any ideas please, I can’t keep the dog for the long term.”

Her plea was shared by a Columbia Lost and Found Pets Facebook page, where the operator of South Eastern Homeless Animals stepped in and is currently taking care of Scooter according to WYFF.

In the meantime, reporters at WLTX were on the case and helped fill in some of the blanks in Scooter’s tale….

Police say that Scooter belonged to Eric Dugwyler, who had been arrested for possession of drugs Tuesday afternoon.

Duwyler had a dog, a backpack and $50 that he didn’t want to turn over to police, so he gave the items and the dog to two other people who were with him.

“Officers on scene offered to store his property at the police department for safe keeping until he was able to be bonded,” a police report said. “Mr. Dugwyler declined officer’s offer to hold his property, instead choosing to make arrangements with the subjects to care for his property.”

Alas, Dugwyler chose poorly when it came to caretakers for his dog.

West Columbia Police have since issued arrest warrants for Raymond Anthony Laskowski, 38, and Elizabeth Allison Laffere, 22, for abandonment of animals.

An interesting twist to the story: Late Wednesday night, the animal rescue was able to contact Dugwyler’s mom in Longmont ,CO. Reps there said the mother wasn’t surprised by the arrest, but was shocked to hear the dog was abandoned. They said that Dugwyler’s mom was planning a trip to SC to pick the dog up. 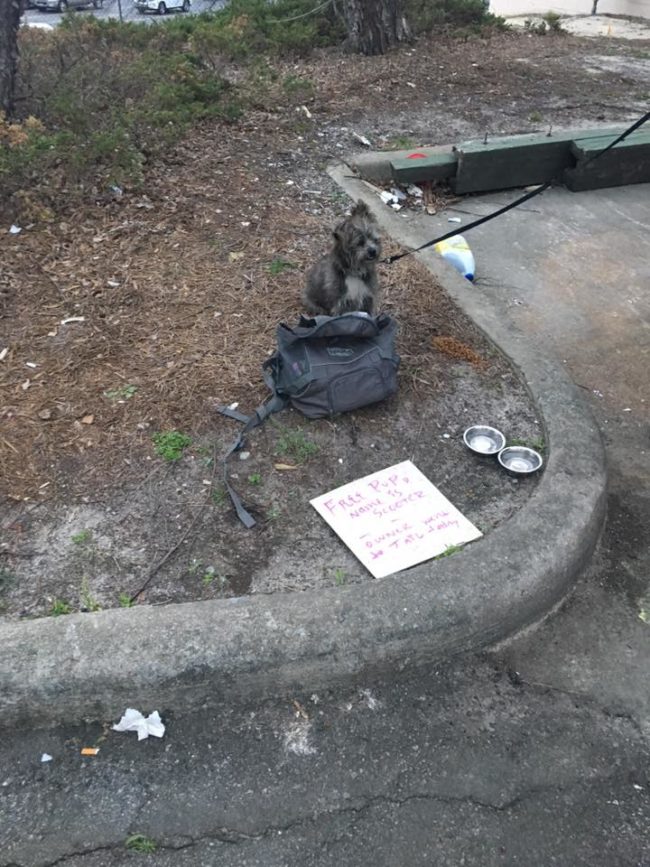 Thanks to the determination and kindness of Jaramillo and Cushman, Scooter is now safe and sound in the home of Paula Langford, who is the founder of Southeastern Homeless Animals.

As of this writing, rescuers are looking to place Scooter in a home. It is believed that police arrested the dog’s owner at a local Walmart before he was found. You can find more information in the video nect page.

If you’d like to learn more about what happens to dogs when their owners go to jail, check out this piece on Vice. Share this saddening story with all the animal lovers in your life. We wish Scooter nothing but love and happiness from here on out!