Many people really don’t like having to go to the dentist (the author of this article, especially…). It can be painful, and can cost a lot of money. However, there may be an answer to all of your dental worries! Her name is Karma, she’s a wonderful rescue dog that has a deep understanding of tooth pain, and is here to ease you worries. 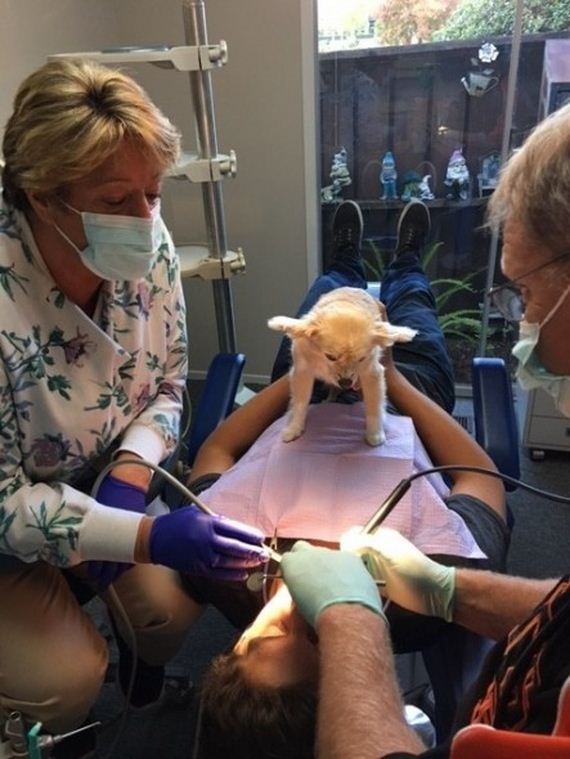 She was rescued by Muttville Senior Rescue in San Francisco.  When she was found, her teeth were in such bad shape, they had to all be removed.  This may have left her without teeth, but it also gave her a deep understanding of what it means to suffer with this type of problem.  Perhaps this is what makes her absolutely perfect for her current job. 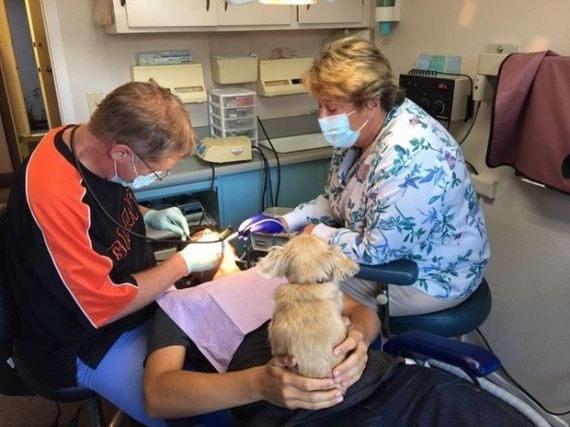 Karma was adopted by Debra Garrett.  She was looking for a companion dog for her elderly mom, and from the moment Garrett met Karma, she thought that it would be a perfect fit.

“My mom is 82 with Alzheimer’s and really wanted a dog,” said Garrett to The Dodo.  “We did not want her to have a dog that was likely to outlive her or that would require a lot of training and energy. Muttville provided us with the perfect solution for my aging parent, an older dog that was tried and true.” 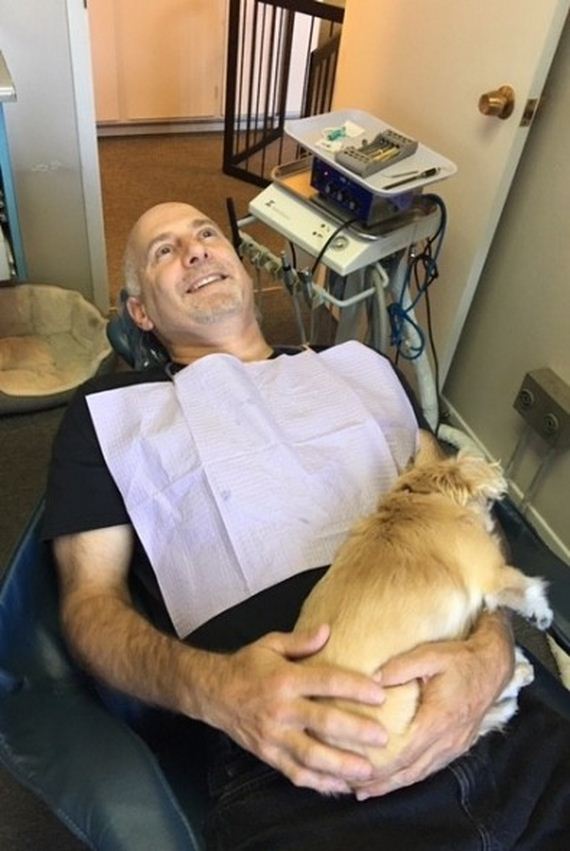 However, things just weren’t meant to be.  It became very clear very quickly that Garrett’s mother just wasn’t ready to take care of Karma.  Garrett and her husband didn’t want to take Karma back to a shelter or rescue, and ended up taking Karma in themselves.

“Karma is the sweetest, quietest, most loving little dog we ever could have asked for,” said Garrett.  “She loves people and just wants to be held or cuddled by someone.” 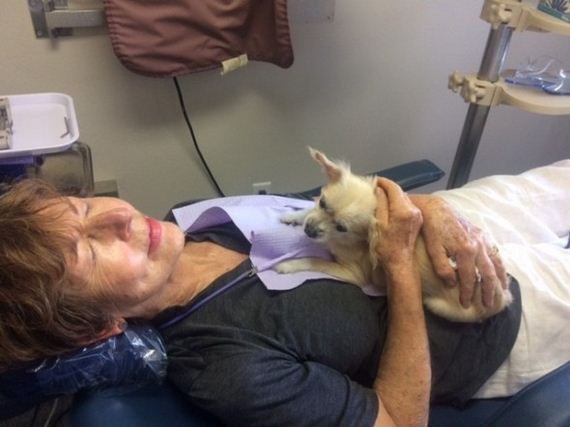 Garrett and her husband both work at a dental practice.  The job often requires them to work long hours, which when they didn’t have a dog was fine.  However, they didn’t feel right just leaving Karma at home alone for all of that time.  So, they eventually decided to bring her to work with them.

Karma being the sweet dog that she is, and having such a strong desire to just be with someone, it didn’t take very long for the Garrett’s to realize that this was where Karma belonged all along.  She seemed to have an innate ability to calm patients that were very anxious to be in the dental chair in a way that no human had ever been able to before. 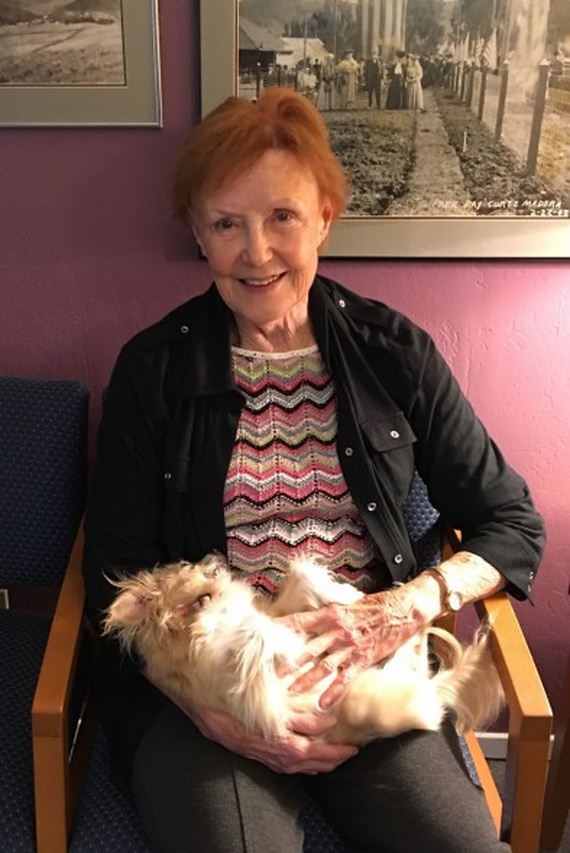 “It’s magical to watch a true dental-phobic patient melt while holding Karma in one of our chairs,” said Garrett.  “Even patients who didn’t think it would help much found that their appointment went much better with Karma on their lap.”

Maybe it’s because she’s been through it all herself and knows just how scary the dentist can be.  Maybe she’s just so full of love and thankful every day for being rescued.  At the end of the day, the reasons don’t really matter, Karma is PERFECTLY suited to do what she does, and she enjoys it so much.  Apparently, having a mouth full of really healthy teeth are NOT a requirement for being a dental therapy dog. 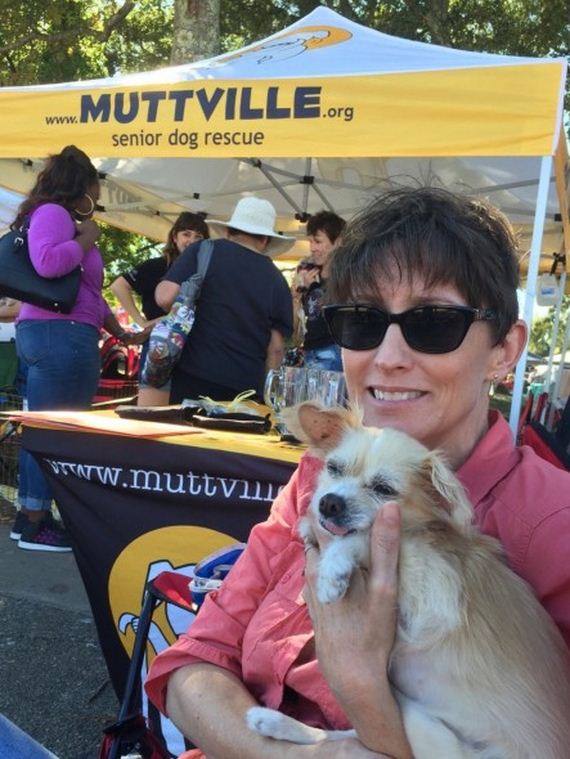 “She fills me with a sense of contentment whether I am holding her myself or watching her with one of my patients or seeing her in her little bed,” said Garrett.  “The office is a much better environment with Karma working beside us!”