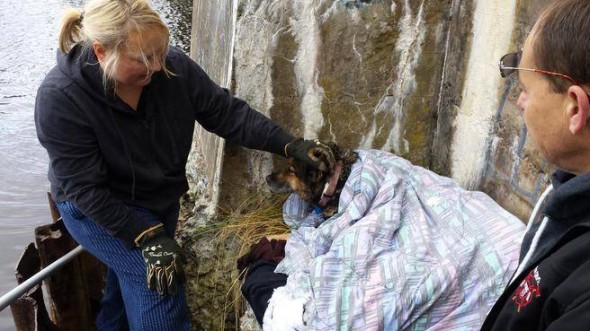 When Linda Quinn, from Coxheath, Nova Scotia, Canada, went out to walk her dogs on November 30, 2014, the last thing she thought was that she would be saving a senior dog from drowning in a river. Not only did she save the pet, she also helped reunite the dog with the worried owners.

Quinn took her two dogs for a walk near the Sydney River in Coxheath. She heard dog cries and followed the sound, and found a dog trapped by rocks and concrete at the foot of a train trestle. What worried the woman was the river’s rising tide, and if she didn’t act quickly the dog would drown.

The woman rushed back home to drop off her own dogs and came back with Carmen Dunn, a friend. Both woman worked quickly to move the rocks away from the dog and tried to get the pet to safe ground, but when they realized they wouldn’t be able to reach safe ground with the dog, the women called authorities.

The Coxheath Volunteer Fire Department was nearby and soon after the call was made, they arrived at the scene to rescue the dog. The Cape Breton SPCA also arrived and it was thanks to their officer Nancy Lynk, that the rescued dog was reunited with the rightful owner.

Officer Lynk recognized the distinctive pink collar the dog was wearing from a Lost Dog reports Karin Shute-Sellhorn made about her missing 14-year-old dog named Duchess.

After the dog was pulled out of the water, authorities contacted Shute-Sellhorn and an emotional reunion took place.

Duchess had been missing for a week. Her owner said the dog had been taking medication for an ear infection, which made her disoriented prior to getting lost. Shute-Sellhorn took her pet home and scheduled a vet appointment to make sure her best-friend was in perfect health.

The pet owner was thankful that caring individuals like Quinn and Dunn went out of their way to help a dog in need, her dog.