Billy Marshall’s specialization was explosive ordnance disposal when he was serving in the Air Force in Iraq in 1992. That’s when the war hit home, literally. 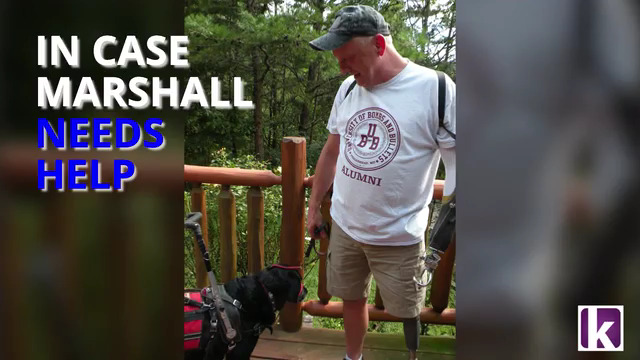 He was outside his Humvee, inspecting something at the roadside when, well — he doesn’t really know what happened. He only remembers it happened on his wife, Krista’s, birthday: October 16. A bomb went off. And though he has no memory of the event, it changed his life forever.

Marshall, who is a Purple Heart and Meritorious Service Award recipient, lost part of his left arm and leg. He wears prosthetics on both. And these days, he lives in a log cabin home in Sevierville, TN. And Lucy, his service dog, is an integral part of that life.

He acquired the black Labrador through Rocky Mountain Service Dogs, a program that supplies highly trained dogs to wounded servicemen and women. 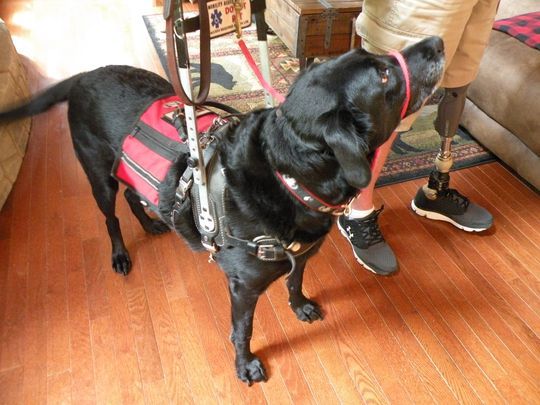 “She is the smartest dog I’ve ever seen,” Marshall told the Knoxville News Sentinel. “She has really changed my life.”

Marshall says Lucy was the nonprofit’s first trained dog, but since they folks at this organization do their best to match dog with recipient, the star pupil-pup wasn’t paired with anyone until Marshall showed up.

“She was really laid-back, and we hit it off right away,” he said.

Marshall did quite well without any assistance for the most part, but then, one night, he and his family were out at a dinner theater in Pigeon Forge.

“They had this huge pig on display,” he recalled. “I had never seen a pig that big. I was watching it and not where I was walking.”

The result was a broken right leg — his good one. And it was a year before he discovered he’d broken it. 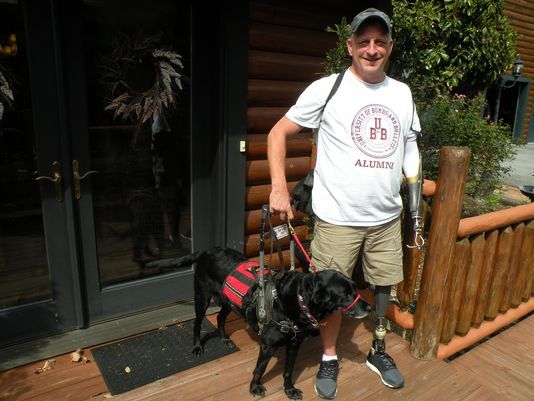 “She found a place in Texas but was told it would take two years,” he said. And eventually, she came upon Smoky Mountain Service Dogs.

Visits, training sessions and such followed, and then, finally, four years ago, Lucy came home. Since then, Marshall’s life has improved considerably.

“She has saved me from falling so many times,” said Marshall, now 47. “Once, I got my foot stuck on the rug and started to fall. She locked up like a statue and supported my weight.”

The dog stays by his side, 24/7, and has in many ways become an extension of Marshall. It was a sixth-sense sort of thing that played out in Lucy’s favor, as well. When something wasn’t right, Marshall could feel it.

He took her to the University of Tennessee College of Veterinary Medicine, where it was determined she had blood cancer. Her doctors were amazed that Marshall knew something was wrong, but because he did, they were able to catch it early enough for treatment.

Lucy is now in remission.

The vets were astounded that Marshall had sensed it so early and, because he did, they were able to turn it around. Lucy is in remission.

“I know how having a service dog like Lucy can change your life,” Marshall said. “I told the people at Smoky Mountain Service Dogs that if there is anything I can do to help other vets I will do it.”

On Sept. 11, the nonprofit began a campaig called “More Wags for Warriors.” The goal? Raise $500,000 to build a new facility that will house 18 kennels, training space and an office.

Service dogs require 1,800 hours of training which right now must be done off-site in places like churches and shopping centers. A new purpose-built facility will eliminate the need for finding alternative space.

Days in, they are half way to goal thanks to a $225,000 donation from the American Valor Foundation.