Most people, especially dog lovers, can’t help but smile when looking at a Shar Pei; something about the squishy face and extra skin has a certain type of charm.  As puppies, they are a mass of wrinkles until they eventually grow into their skin.

But these unique looking dogs have quite an extensive history from their origins in Canton, China to being deemed one of the world’s rarest dog breeds by Time Magazine and the Guinness Book of World Records. According to the American Kennel Club, the Shar-Pei are strong, regal, independent guardians, famous for intelligence and loyalty.

Rescue Teamsters is the Florida Division of Chinese Shar Pei Network Inc. They are a 501c3 not for profit, located in Winter Haven, Florida, dedicated to saving this amazing and rare dog breed. They save pets who have been thrown away, put in shelters or left roaming the streets. They are a foster based rescue and will provide all medical treatment and rehab needed to bring each dog back to good health.

Like many rescues, they have their share of hardship cases. Beau was hit by a car and left for dead. Vivian, saved by MDAS, had a huge growth on her ankle and hip, bald, and very sickly. She is still at the vet’s office undergoing care. One of the saddest cases is Mooky who was confiscated from his home by animal control after being severely burned and abused by his owners.

Mooky’s story of abuse even made the news because it was so extreme. His owners would pick him up by his ears which caused the cartilage to dislodge. Because of this rough treatment to his sensitive ears, he has developed extremely painful ear infections which cannot be treated.  His one ear canal is oddly shaped now so medications are unable to reach the area that needs help.  He will need ear surgery which will cost around $12,000.00. There is also an outstanding vet bill from his previous surgeries and vetting to take care of the intentional burns he also suffered.

To learn more about Mooky, help with his vet bills and to see his Amazon wish list, go here

Elsa and Olaf are only three months old. They were born to a mother, who was one of five Shar Pei dumped in Alabama. As soon as it was discovered the one dog was pregnant, the Rescue Teamsters were called in to help. Elsa was born with a crippling disability known as Spinal Bifida resulting in scoliosis (curvature of the spine.)  According to the spine specialist, there is no surgery available to correct the scoliosis. Rescue Teamsters will be getting a second opinion.  In the interim, Elsa will be going to therapy several times a week for many months.  She will eventually need to be fitted for and learn to walk with a cart.

But this little girl is a fighter. She loves to play as much as she loves her brother Olaf. They cannot be separated. Both Elsa and Olaf will need their puppy shots, de-worming, and regular vet care. To see Elsa and Olaf’s videos, contribute to their vet care and see their wish list; go here

Mooky, Elsa and Olaf are just a few of the special needs cases that Rescue Teamsters is caring for.

To see more of the dogs in their care; visit

Donations can also be sent directly to their Paypal account 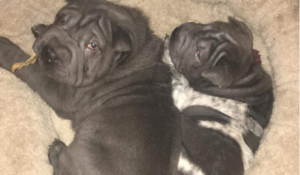 Help the Rescue Teamsters help all the dogs in their care.

We are their voice, their arms and their legs, to work hard for them to carry out our mission, for a life they have always deserved.

Every pet deserves to live, be loved, and be healthy.

They are a rescue team dedicated to saving one life at a time.