Stevenson, a Sharpei mix was picked up as a stray in the city of Chicago. When found, he was dirty, hungry and underweight, but what surprised Chicago Animal Care and Control (CACC) was that he could hardly keep his eyes open to see, yet somehow he was surviving on the city streets.

The friendly stray suffers from Bilateral Entropion, which means his eyelashes folded inward. This condition not only makes him very uncomfortable, but it keeps him from opening his eyes and seeing the world. 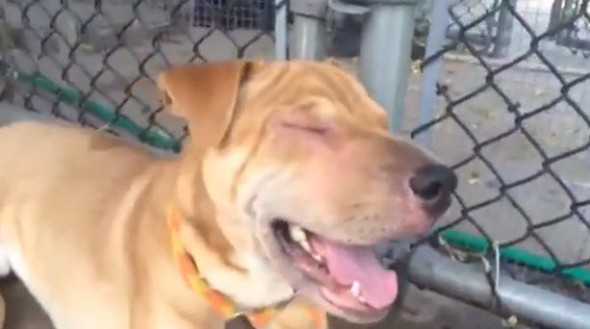 Because the dog’s eyelashes are constantly rubbing against his eyes, Stevenson’s corneas are irritated. If he doesn’t get surgery to fix them soon, he could have permanent damage and even go blind.

Entropion is usually cause by genetic factors and if not corrected in time, it can lead to scarring of the eyelid or nerve damage.