Two dogs inside of a shelter were recently scheduled to be euthanized. A heartbreaking photo was then posted to the pet rescue Facebook page known as “Angels Among Us”. The caption was even more heartbreaking, saying that if no one saves them, someone will “take her away” from me, as if the dog wrote it himself. 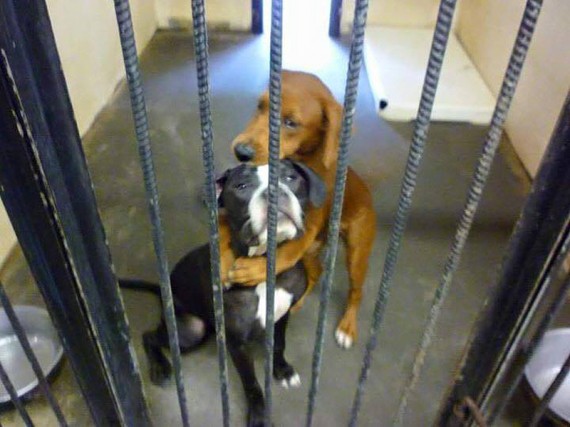 The photo worked, and within two hours of it being posted on to the Facebook page, a local man in Atlanta arrived at the shelter to rescue not one but both of the dogs. They have been saved from being put down, and they are the best of friends.

The two dogs were fortunate enough to be saved, and are going to remain together so that they can live out their days happily.

The Facebook page for the rescue service posted the before and after photos, and expressed gratitude for the man who rescued the two dogs. Additionally, they provided the importance of spaying and neutering
. 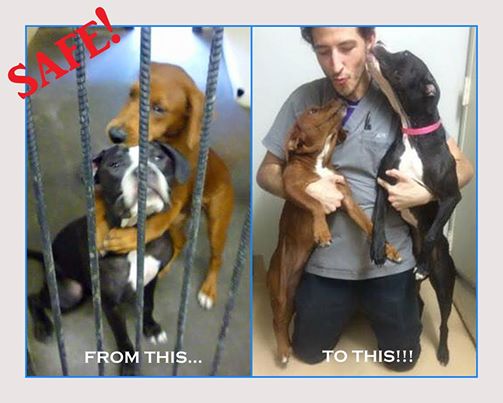 Owning pets is a lifetime commitment. No dog should end up in a shelter because they should have a home or from the very beginning. If no one wants to deal with puppies, the dog should be spayed/neutered to prevent puppies from ever entering the equation.

Unfortunately, not everyone is as responsible as they should be when it comes to pet ownership. Dogs end up in shelters all the time, and due to overcrowding and other situations, dogs will be euthanized if they don’t find homes in a timely manner.

Luckily, Facebook has made it possible for more people to learn about pet rescue and how they are able to get involved. While not everyone is able to rescue a pet, they are able to share posts and hopefully someone can find out about a pet rescue situation in order to make the day.

Have this dog not reached over and given the other dog a hug for the photo, it may not have touched the hearts of so many – and the man in Atlanta may not have made the decision to rescue both of the dogs. This hug literally saved both of their lives, and it is touching to see how both dogs have responded to each other as well as to their new owner.

Everyone should be aware of pet rescue centers and what happens within a shelter. If you are a pet owner, be responsible and keep your dog for a lifetime, otherwise, don’t get a dog at all.

Angels Among Us is based in Atlanta, Georgia – and there are many other pet rescue centers all throughout the country.

Would you rescue a pet? Would you pick up two dogs, especially if they were hugging?