Kelly Duer is coordinating a study of foster care for medium and large dogs, sponsored by Maddie’s Fund, an organization working to make ALL shelters no-kill. Last month, as part of Kelly’s study, she visited the Ventura County Animal Shelter and took some of their long-stay dogs overnight in her hotel room to give them a break from the shelter. Here, Kelly met Mugzy.

Mugzy is the shelter’s longest resident. He’s a 9 year old pit bull, and has been at the shelter for over 500 days. He has Old Man’s Vestibular Disease, which causes him to be a little wobbly when he walks, and can make it easy for him to fall over when he gets in and out of cars or going over curbs. Still, he has a friendly demeanor and a sweet smile, and Kelly was happy to take him out for a day – his first time away from the shelter overnight in over 500 days! 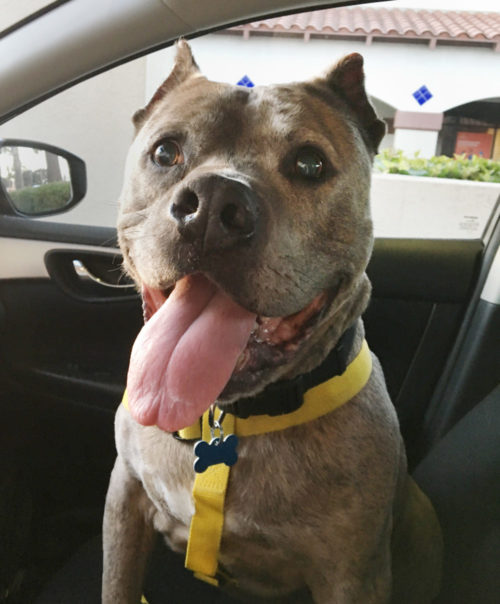 Their first stop was the beach at Ventura Pier. Kelly didn’t want him to walk too far, and he seemed more interested in sniffing trees, so they didn’t stay long. After that they made a trip to Petsmart for a bully stick and Nylabone. “Mugzy’s face lit up the second we entered the store. He walked around for a long time, sniffing every little corner. It is definitely his happy place.” Kelly says. 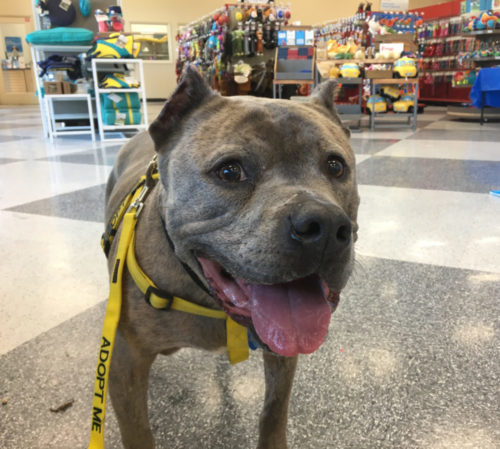 “When we arrived at the cash register, I realized I’d left my wallet outside in the car. I told Mugzy that we’d need to go pick it up and that afterward we’d come right back in, but I don’t think he believed me. He just stood there, tilting his head and smiling up at me. He clearly did not want to leave, and he seemed so happy just to be standing there. I asked him again to come outside with me. He smiled even bigger and didn’t budge. He was just looking at me like, ‘take my picture!’ Then he starting walking again, but he stopped right outside the building’s doors, beaming. His pose made me think of a child standing outside Disneyland. It said, ‘This is my favorite place in all the world!’ 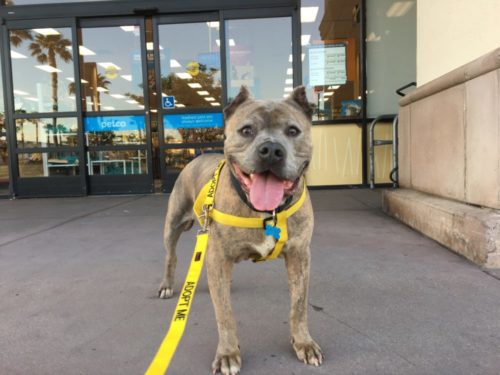 “I snapped a few more photos and then he moved forward a few steps. He met a family that was walking in, and they stopped to rub his belly, which made him very happy. Eventually we made it to the car. When Mugzy realized we were going back into the store, he broke into a run! We paid for our things and I let him hang out in there for as long as he wanted.”

Mugzy got to stay with Kelly in her hotel room for the night instead of the shelter. He was an excellent guest, made himself at home and slept soundly. 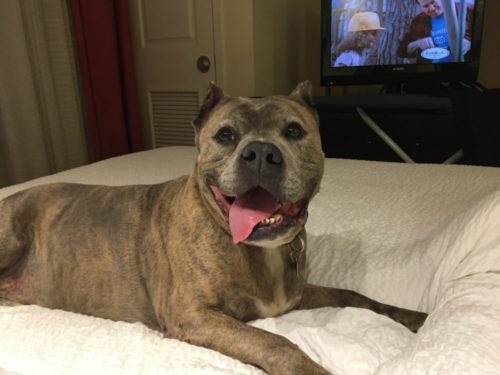 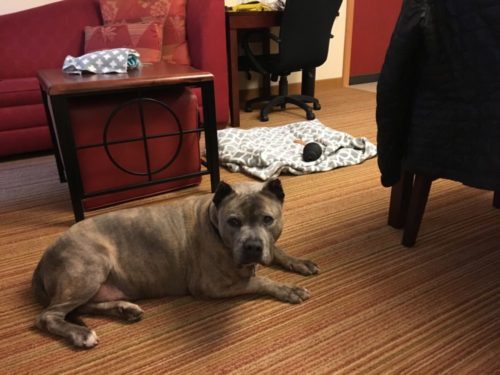 In the morning he accompanied her to the breakfast room, and quickly showed that he was much more interested in being loved than any of the food in the room! “He laid down in the middle of the floor like he owned the place, getting belly rubs from everyone who walked by. I’m pretty certain he would have stayed there all day if I’d let him.” 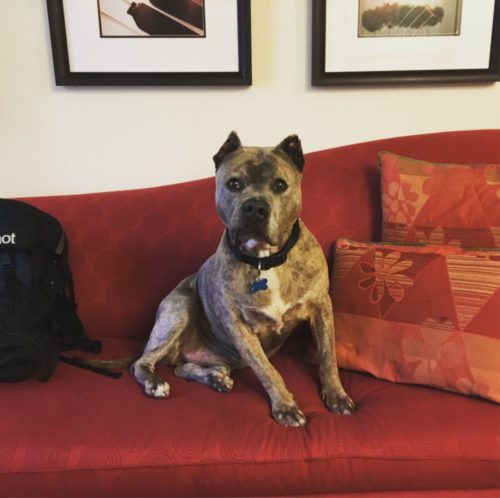 Their day out had to come to an end, and before going home Kelly begged the shelter volunteers to do what they could to find Mugzy a forever home and take him back to his favorite store. Encouraged by Kelly’s enthusiasm, they managed to get a local newspaper out to take a few pictures of Mugzy and make a video about him!

Kelly and Mugzy had a really fantastic day, but at the end of it, he had to return to his kennel. Mugzy is still available for adoption from Ventura County Animal Services, and has lots of smiles and cuddles to offer the lucky family who gets to give him his forever home!