If only dogs could talk, Jimmy, an extremely friendly one-year-old Dutch shepherd, would have a whopper of a tale to tell. The dog’s strange odyssey began earlier this month when animal advocate and photographer Pat Gregoire and her friend found the stray at their mutual workplace in City of Industry, an industrial suburb of Los Angeles located in the San Gabriel Valley region.

The Good Samaritan took the dog to a nearby veterinarian to check for a microchip. And there it was – in the dog’s ear, however there was no 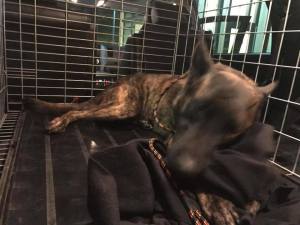 information available to confirm his identity or from where he came. After a brief conversation, Pat and her friend decided the best plan would be to transport the dog to Baldwin Park Animal Care.  The dog was in excellent health, had obviously been well cared for, and most like

ly he had escaped from his home. Surely someone would be searching for this gorgeous pup and would most likely be checking around at all of the local shelters.

Pat describes on her Facebook page Jimmy’s amazing journey from the beginning; it seems Jimmy was just different than most strays. This boy was as strong as an ox and gave his rescuers a true good-natured- albeit strong and stubborn challenge:

“She  said she’ll drive, but won’t drop him off, so I go along,” Pat recalls. “He’s a total nutcase in the car; destroyed her granddaughter’s new blanket and trying to keep him still, on leash, I didn’t know my arm could bend so many ways. We then drop him off at Baldwin Park.”

The dog was held for the required amount of time since he was chipped, but with no information, Jimmy soon became available for adoption. And now is when the story took a most unusual doggy twist. For ten days, he was on hold and no one came looking for him. Maureen Delaney, the founder of  local German shepherd rescue, Delaney’s Dog knew he was special as Dutch shepherds are quite rare, and sent his short video to her veterinarian who had a number of  contacts with the LAPD.  And no sooner had the veterinarian sent the photo and video of Jimmy, the LAPD officer recognized the dog.

Jimmy had arrived with 38 other dogs who were all candidates to be trained for the police department’s K9 division. Somehow Jimmy’s crate fell off the transport; fellow commuters were honking their horns as the dog’s crate toppled over, but by the time the canine transport was able to stop, Jimmy’s crate was broken and the dog long gone. For the next two days, officers searched for Jimmy, but with no luck.

“Here’s the fun part,” a truly amazed Pat reported. “LAPD had already paid $11,000 for this dog. He was flown from a breeder in Germany to Los Angeles Airport. Jimmy came over with other dogs, but while traveling from LAX to the Riverside training facility he got lost. He traveled from LAX to City of Industry (8 miles) on his own. Apparently his chip ID, as well as a tattoo inside his ear, matched the information on the dog purchased by the LAPD. They are beyond thrilled to have their dog back.”

No one from the LAPD has responded to the Pet Rescue Report so far – but we will keep on trying and follow up on Jimmy. For now we are all thrilled Jimmy has been reunited and proud of the rescuers who give so many stories happy endings.

Photos and video of Jimmy courtesy of Pat Gregoire and Delaney’s Dog.

Check out his short video: