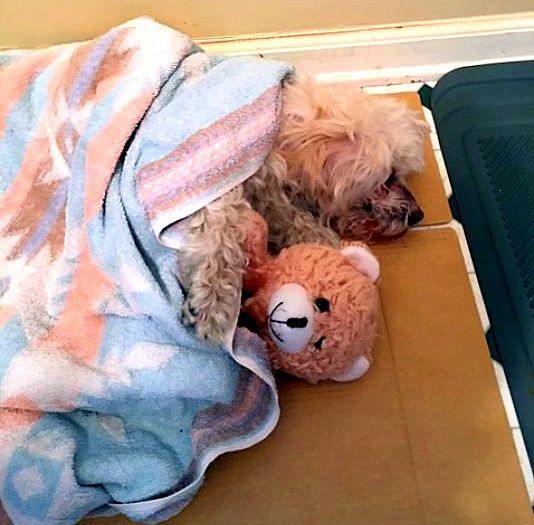 A partially deaf and blind dog in the beginning stages of dementia got confused and wandered away from his yard and nearly died.  Thankfully, a neighbor and sheriff’s deputies found him, and saved him from a slow and painful death in an icy Michigan creek.

Janet Lane had been battling a cold and got up around 3 am last Friday to get a drink of water.  She let out Rocky, her family’s 15-year-old adopted poodle mix.  She waited for him to finish his business and come back inside as usual.  But unlike every other time, Rocky didn’t come back in.

She grabbed a flashlight and went looking.  He can barely climb the steps from the family room to the kitchen, and wasn’t in any state to be an adventurer.  Nevertheless, the little dog had vanished.  Lane could only imagine the worst, but was hopeful he’d return.

“Maybe he went off to die. We were waiting, hoping,” she told Detroit Free Press.

The family’s Orion Township home is in the midst of woods and wetlands, a dangerous place for impaired animals.  Twice they checked the creek nearby, but there was no sign of him.

Nearly 19 hours later, a neighbor called the Oakland County Sheriff’s Office to report hearing an animal in distress – it was Rocky.  Deputies found the little guy hypothermic and trapped in the very same creek bed.

By the time they reached him, it appeared as if it was too late.  But a deputy performed chest compressions, and the neighbor supplied blankets to warm him up, and he was resuscitated.  The Lanes were called after Rocky’s tag was checked for contact information.

“Oh my God. It was great,” Lane said of the phone call.  “We had given up all hope. It’s definitely a great ending. Who wants to die out by themselves?”

She and her husband, Jim, wrapped him up in towels when they got him home, and gently blow-dried him.  They tried to get him to drink water, and took him to a vet the next day.  He is now home, and though standing up has been a challenge, he’s starting to toddle about and eat and drink again.