A shy and backward donkey named Wendell was rehomed by his original owner who insisted that he was wary of people and dogs. But Jennifer decided to take Wendell in and put him with the rest of her herd, and that’s when things took off! The donkey found the one he needed to help him break out of his shell, and it wasn’t one of the other donkeys…

His hero ended up being Oakley the Pit Bull! At first the donkey wasn’t sure what to think of the dog, but Oakley would lick Wendell’s face and ears and constantly show him attention. The donkey allowed the kisses and started to take to the Pittie in a surprising turn of events!

Wendell will take grain out of his bucket every morning at feeding now and drop some on the floor for Oakley to eat before following the dog outside to kick off their day together! They’ve really bonded and become quite the best buds who seem to truly understand each other. 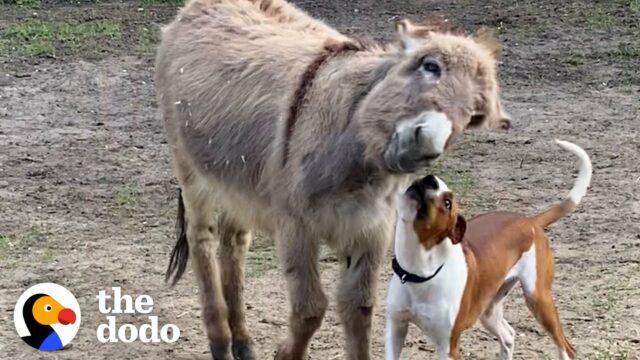 The two will run around together and play zoomies out in the yard as one of their main activities, and you can just see how much they love spending time with one another!

“The donkey who didn’t like people or dogs sure has changed.”