Whenever a hurricane, or any other natural disaster hits, there is much collateral damage. And tragically, it is not just to property but often loss of life, both human and animals. In addition to many animals being killed, many others are often displaced; some never reuniting with their owners.

This happened to Simba, an approximately two/three year-old male dog who was found shortly after Hurricane Irma in 2017. He was found in the Miami area with no tags and no chip. His owners were never found, and no one came looking for him. Since that time, Simba has been relying on strangers and Good Samaritans to care for him. Unfortunately, the man caring for him had to leave the country, and Simba’s care then went to his mother Claudia Herman. He dropped him off at her house when he left. 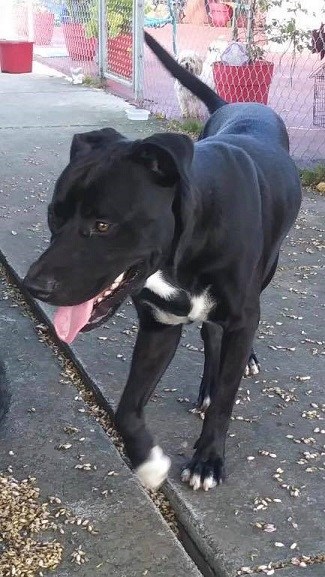 Claudia took Simba to her vet and had him neutered and given all necessary vaccinations. Now the landlord is saying “no dog” so Simba will have to be sent to Miami Dade Animal Shelter which is known for its high kill rate. Claudia has two weeks to find a new home for Simba. Currently, Simba is living in a narrow alleyway between two houses due to the “no dogs allowed in the house rule” stipulated by the landlord.

A plea went onto Facebook begging for all animal advocates to help this sweet boy who has been described as good with people and other dogs, but so-so with cats. It is not known how he will be around small children. Please help find a home for Simba. Don’t let him become another statistic. He has lost his family once; now he is losing the one other person who cared for him. He deserves a chance.

Interested parties or rescues that can help Simba need to contact Feiga Mor via email at tsipway@aol.com.