A few weeks ago we told you about that Sir Patrick Stewart is fostering a pit bull named Ginger, and how they bonded instantly. He admits that he once believed the negative stereotypes about pit bulls, but his love for Ginger and other pit bulls has grown so deep that now he’s partnered up with the ASPCA to #GetTough against dog fighters. 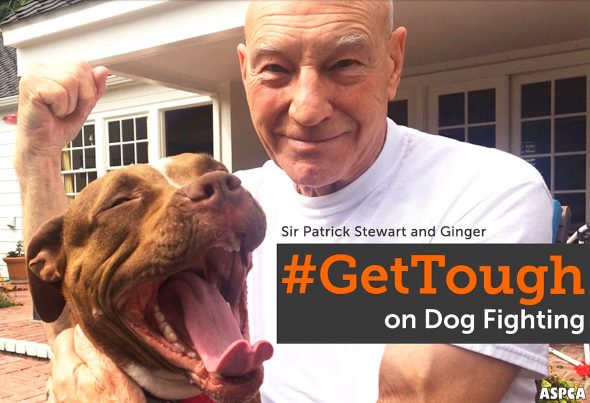 The sci-fi cynosure and his wife, Sunny Ozell, got Ginger from Wags and Walks, a non-profit organization that helps dogs find the people who are best suited for them.  The love affair between Sir Pat Stew and their golden pebble has been unfolding on Instagram to the delight of dog lovers worldwide.  He’s unyieldingly tender and patient with her, which is exactly what all dogs need, but rescue dogs in particular. 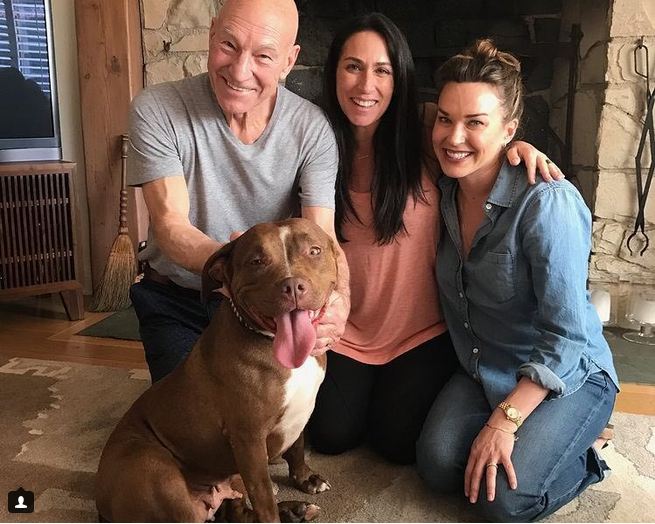 “I find that my relationship to the world and to the news every day in the papers and on the television has been changed by Ginger, because she has brought such a quality of patience and tolerance and fun into our lives, that it has, in a very short space of time, shifted my sense of where our world might be going,” Stewart told PEOPLE.

“I literally find myself more optimistic than I was, and there is only Ginger to account for this.  It is the impact of sharing my life for only seven or eight days with Ginger.” 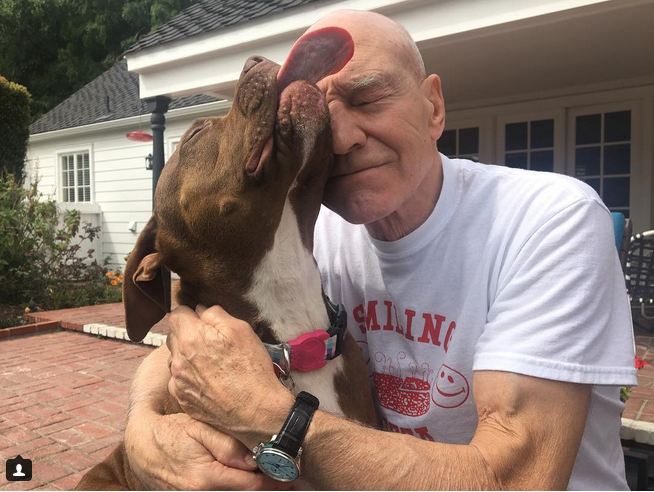 Stewart admits that he wasn’t always keen on pit bulls, and had believed the negative sterotypes about them until he was introduced to a docile senior pebble named Sadie in Brooklyn around five years ago.

“I had a reaction to that, which I am now significantly ashamed of, because pit bulls to me meant only one thing: aggression, hostility, violence. I was uncomfortable with the idea of meeting this dog,” he confessed.

“Immediately upon meeting her, something happened and I found myself simply absorbed in her whether she was paying attention to me or not.  On these evenings when I came home, tired and irritable, and sometimes unhappy or stressed by the day’s work, she would sit alongside me, putting her head on my thigh, and occasionally reaching out a paw and touching my arm or my hand, and look up at me with an expression in her eyes which only said one thing to me, which was, ‘Are you okay?’ As we sat there, just the two of us on the sofa, I could feel my stress level and blood pressure going down, and the evening I had being adjusted.” 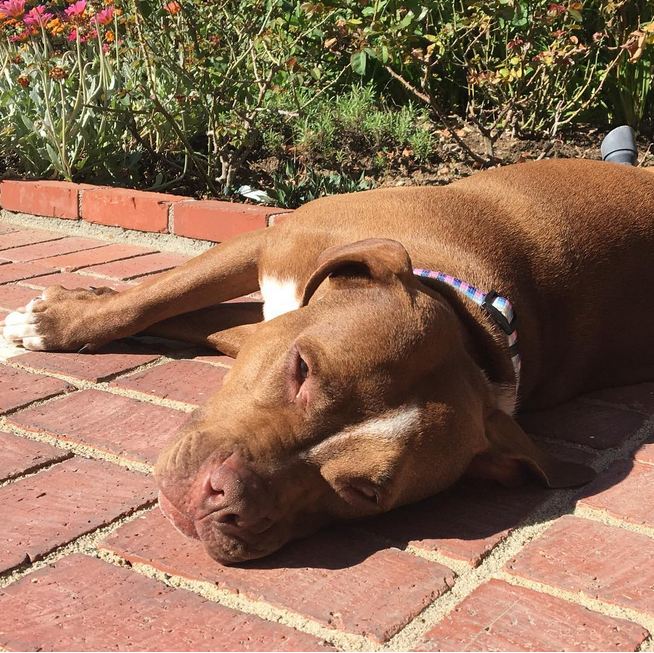 The comfort and joy Sadie brought to his life is partially what inspired Stewart to foster a pit bull while living in LA.  Now 76, Ginger is the first dog he’s had in over six decades – since he was 14!  He and Sunny would love to adopt her, but the UK has strict breed specific legislation (BSL) preventing people from making bully breeds their family members, so the couple is hoping a stateside home can be found for her.

“We know now without any doubt that Ginger will find a marvelous home and we have a list of people we know would love to have Ginger,” Stewart said. “We know she is going to be safe, happy, content and having a great life.”

In the meantime, the Star Trek and X-Men star is devoting himself to fighting back against BSL and dog fighters by collaborating with the ASPCA for National Dog Fighting Awareness Day on April 8th.

“I am very happy to be part of the campaign that is speaking out against this and the urgent need for the law and organizations to intervene whenever they can,” he explained.

Pit bull parents are encouraged to post selfies with their pibbles on social media sites with the hashtag #GetTough to show that not only are they taking a stance against the barbaric and torturous “sport,” but also that most pit bulls are really just lambs in wolves’ clothing.

“The want to please is an absolute characteristic of pit bulls,” said Stewart, who has now been doing his homework on bully breeds since taking in Ginger. “It means that these dogs can be used trained and tampered with in a way that, in order to please their masters, makes them angry and violent, and makes them become fighting dogs.”

Every day, thousands of dogs – mostly pit bulls – are euthanized simply because shelters are overrun with them and people would rather buy puppies from breeders than give these wonderful dogs the chance they so very much deserve.  Please consider adopting a pit bull – though they may be rambunctious, they exude love and happiness, and want nothing more than to be your companion in whatever you’re doing.

“This is not the end for us, we are now totally committed to fostering and adoption,” he said. “There will be a Ginger in our lives soon, because there has to be.”