Rick the German shepherd spent six years of his life sniffing out explosives in South Korea and now the Air Force dog is enjoying retirement. The best part? Retirement began with a sweet reunion!

This week, Rick reunited with his former handler, U.S. Air Force Staff Sergeant Amanda Cubbage, at the Davis-Monthan Air Force Base near Tucson, Arizona, where Cubbage is now stationed.

Years back, Cubbage and Rick were partners and formed a lasting bond. As is often the case with military dogs and handlers, the pair eventually had to part ways, but now they’ll be together forever.

When Cubbage heard Rick was going to be retired from active duty, she worked with American Humane to ensure Rick would have the loving forever home he deserved in the wake of tireless service to his country. This organization helps retiring service dogs reconnect with their best friends back in the States. They helped Cubbage to adopt Rick, and now they will be together for good. 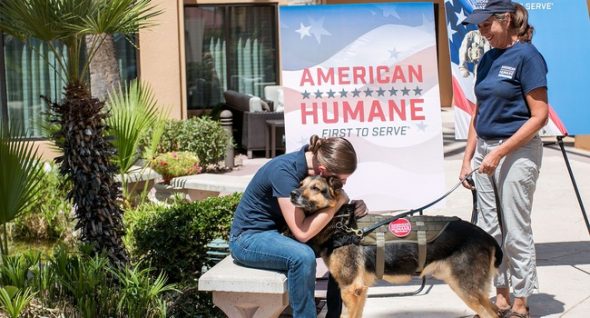 “Rick is my partner, friend, brother, and son,” said Sgt. Cubbage in a statement. “I needed him more than anyone that isn’t a K9 handler would ever be able to understand. He was there for my happiest days in Korea and the saddest days that I ever had there.”

“These heroes have served their country with valor, and saved the lives of our servicemen and women while risking their own,” said Dr. Robin Ganzert, president and CEO of American Humane in People. “It is essential that now we step up and do the right thing for these warriors so they can benefit from the remarkable bond that safeguards and connects them, not only in war, but in peace.”

“I couldn’t have been any happier than the day I got the email that I could bring him home forever,” Cubbage added. “I can’t wait to pick up where we left off. He was my buddy and I missed him each and every day. There is just something about having your partner finally home with you that can’t be explained. He deserves the life of ease and luxury that I will give him.”