This stray had been roaming the streets of Los Angeles for quite a while. He was lost, alone, and skittish. Any time that someone would approach him, he would run the other way. The rescue organization, Hope for Paws, was called in to see if they could help this poor little creature.

When searching the pup’s last known area, Eldad Hagar and Jamie Ray Newman spotted him lying in the front yard of a school. He was just lying peacefully in the grass and only moved to lift his head if someone stepped near him. Seeing their opportunity to gain control of the situation, Eldad and Jamie set to work. They walked onto the school’s ground and closed the gate, so that way if the pup ran, he wouldn’t be able to go to the street. The duo slowly approached the seemingly sleeping pup, and when Eldad tried to slip a leash around him, the pup went nuts! He started barking and running around all over the place in an attempt at making his escape. In an attempt to calm the frightened pup down, Jamie offered him a bit of burger meat. And while the pup was definitely shy, it did seem to calm him down a bit… that is until the sound of breaking glass from inside the school startled him. He went back to running in circles, rolling around, and trying to chew through the leash. 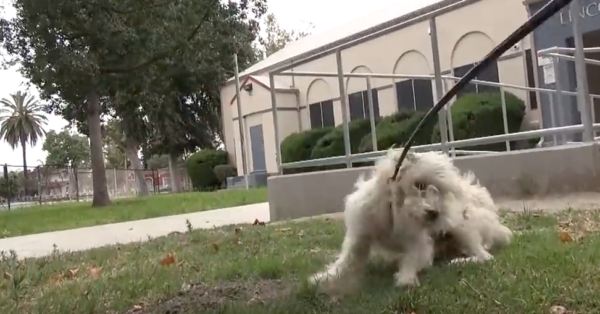 Eventually Jamie and Eldad were able to calm the pup down with a bit of food, a soothing voice, and a few soft pets. Jamie named him Seymour and once he calmed down enough, Jamie was able to pick him up and carry him away from his life filled with loneliness. He was brought to the Hope for Paws rescue and given a well-deserved bath before being sent to a foster home. He didn’t stay there long! Soon after his arrival at his foster home, Seymour was adopted and was given the forever home that he always deserved! 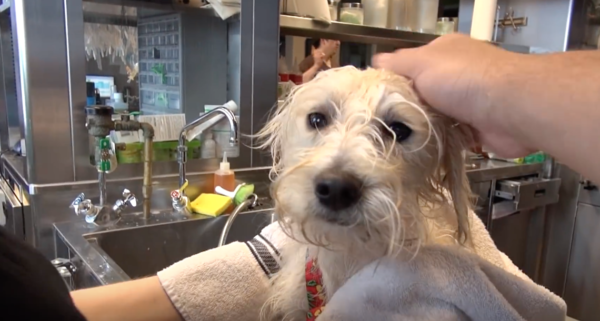