Otis the dog saw an opportunity and took it. Just one day after Hurricane Harvey hit southeastern Texas, many communities are picking up the pieces and doing what they need to do to survive the fallout – including Otis.

Tiele Dockens was checking out the damage in her neighborhood in Sinton, Texas, when she spotted a dog on the street carrying a large bag of dog food.

She quickly snapped a photo, struck by the dog’s keen sense of survival and posted it to Facebook writing “This dog is walking around Sinton TX carrying a entire bag of dog food with him. LOL #refugee”.

The photo quickly went viral, striking a chord with people. “Must be a Texas dog cause he can survive without help,” one commenter wrote. 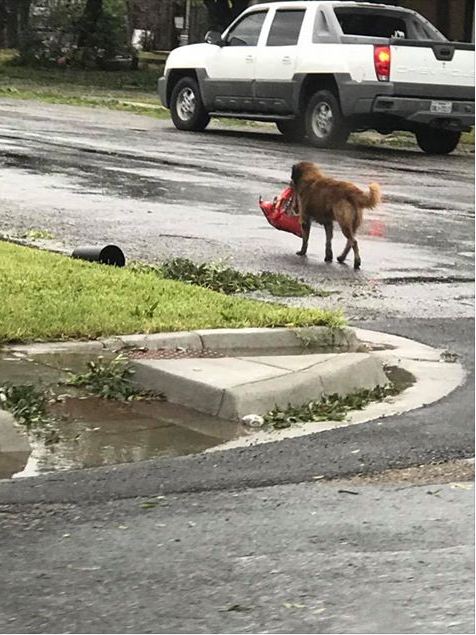 Dockens reassured people that the dog was not a stray, adding “PSA: Owner is found. He is not a stray he just got out on his street.” She told HuffPost a day later that a lot of people were outside after the storm struck cleaning up debris from their yards and street and that she had spoken with Otis’ family.

Otis made it home safely, although where the bag of food came from remains a mystery.

Although Dockens and the residents in Sinton are “holding up good”, other parts of the Gulf Coast are dealing with historic flooding that is endangering thousands of lives in Houston. To find out how to help a lost or distressed animal in Texas, contact the SPCA of Texas, Austin Pets Alive!, Dallas Animal Services or the San Antonio Humane Society.