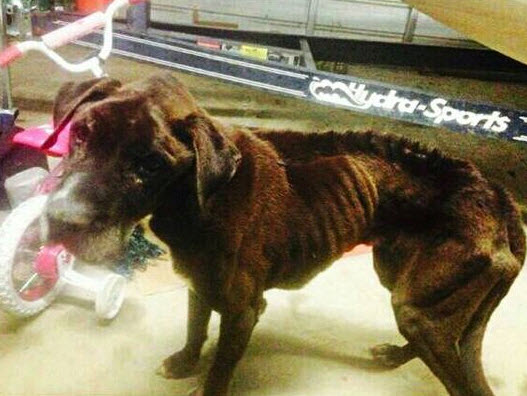 This past November, a starving large breed dog, possibly a Great Dane mix, wandered into a Greeneville, Tenn. garage, looking for shelter, food and peace. The malnourished black dog probably had a few days left – if not hours – to live, all he wanted was a comfy place to rest his tired body, little did he know that walking into that garage would forever change his life. 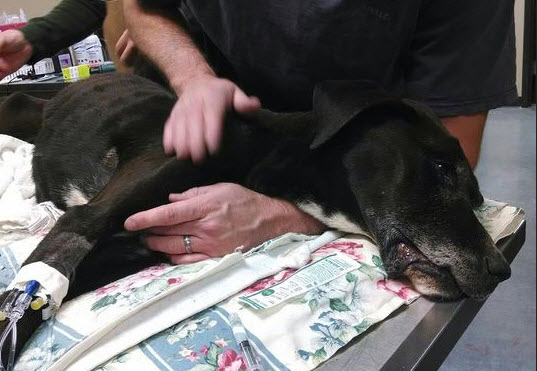 Today this dog goes by the name Ruger, and he was rescued by Bright Hope Animal Rescue.

After Ruger walked into the garage, the homeowner contacted the rescue organization, and founders Jason and Amanda Hopson set out to pick up and rescue the dog. The Hopsons took the dog home but at 2 a.m. Ruger fell unconscious and his rescuers thought he had passed away.

The dog was rushed to a veterinarian and after emergency exams, veterinarians discovered his stomach had twisted due to bloat. Emergency surgery was performed and Ruger’s life was saved.

Dr. Al Claiborne from Animal Medical Center of Greeneville said Ruger “was really a very poor anesthetic and surgical candidate, but [he] really came through very well, [and was] definitely a fighter.”

Weighing a just 48 pounds when rescued, veterinarians and rescuers knew that Ruger’s road to recovery would be a long one. Lukily, after a few weeks of medical care and the unconditional love the Hopsons have provided, the once emaciated dog has started to show signs of recovery.

Ruger has gained 5 pounds and enjoys human companionship. He has started to play like any normal and healthy dog would and his personality now lets those around him know that he is a sweet, approachable, cuddly big guy.

“When we first took him in, he was just a shell of a dog, emotionally and physically,” Jason Hopson told WBIR News, “the dog was just broken, had no emotion whatsoever.”

“[Now,] his hair is shiny and he is starting to get some muscle back. His front ribs are disappearing. His body is surviving on food and not consuming itself. He spends his days walking around the vet clinic building muscle, enjoying head scratches, and all the healthy food he needs. He walks when he wants and then takes a nap and then goes back to work walking and building those muscles,” posted Bright Hope Animal Rescue on their Facebook wall.

For now Ruger is living at the animal clinic, but once he is healthy enough he will be moved into a foster home. When the time is right, the organization will place him in the ideal forever loving home.