This story was originally shared in the Clear the Shelters Adoption Story Challenge on ShelterChallenge.com. Create your own free Shelter Challenge account and vote for your favorite shelter or rescue group to win cash and prizes. Every time you vote we’ll give an extra donation to shelters!

It was November 2019 at Euclid Pet Pals/Euclid Animal Shelter when a dog came into our care that forever changed our hearts. On that day, the temperatures only reached the 30s, with a frigid wind chill which made your bones cringe every time you stepped outside. There was a cloudy sky hanging over your head and expected snow later in the day. Our Animal Control Officer received a call from a concerned citizen, and she quickly rushed to the scene.

She peered into the bushes to see this severely emaciated lifeless dog laying there waiting for death to take him. He was so emaciated that you could see his whole skeletal body frame, with not an ounce of weight on him. He couldn’t lift his head, let alone move. Our Animal Control Officer and helper picked him up, horrified at the condition of this dog, and immediately rushed him to a local vet. We were shocked to find out that he was only 7-months-old, a puppy. How could someone so carelessly care for this living breathing innocent soul, who has nothing but loyalty and love to give? He weighed only 15 pounds, a dog that should’ve weighed around 40-50 pounds average for that age. 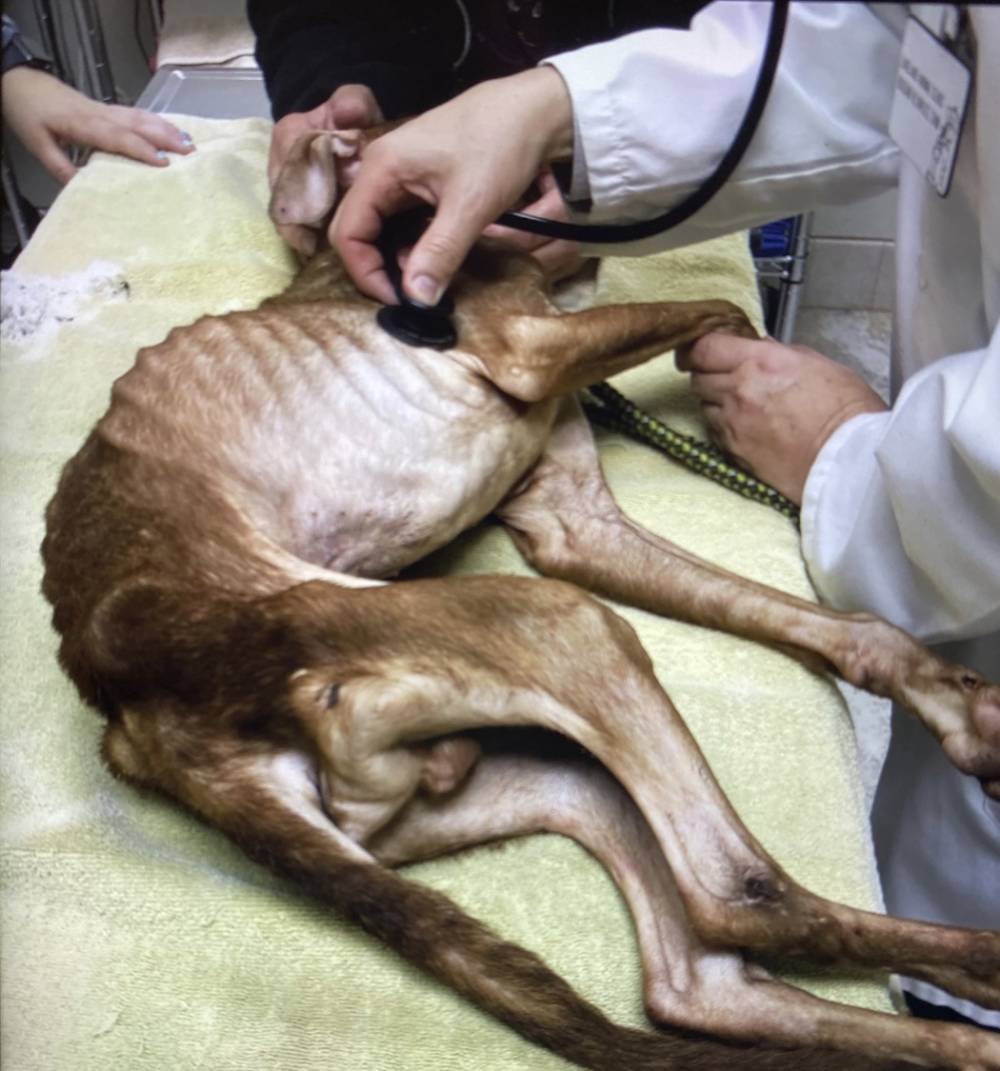 His body temperature was so cold that the vet couldn’t get a reading on what his temperature was. We quickly knew that he needed more emergent, around the clock care, and we rushed him to an animal hospital 30 minutes away. He was named Rocky because the way he looked at all the people trying to help him told us and them that he had a fight still left in him and he had a heart full of love to give. He gave kisses and weak tail wags as he was being carried out of the bushes and when the veterinary staff helped him. This was most likely the first act of compassion and love he had ever felt.

They immediately started treating Rocky. He began suffering seizures as he was treated, from all the trauma his small body endured. X-rays showed his seven months has been full of neglect. It took a few days for him able to be stand up, and he remained at the hospital for some time.

He went into a foster home over the next few months. Rocky loved curling up on beds way too small for him but he loved that close secure feeling around him. He learned that if he gave puppy dog eyes, he could get all the treats he wanted. He slowly and steadily gained weight, learning what it’s like to be carefree and play. He played and in return got belly scratches! Rocky quickly picked up on multiple commands and flourished, having a routine.