Pinta had quite a day on Jan. 8, 2016, after running in and out of traffic on Virginia’s I-64 and I-664, thankfully, State Troopers Chad Dermyer and Jeremy Hagwood chased the pet for a four mile long stretch and safely scooped him off the high speed road.

For early commuters, the sight of two troopers running after a little dog was something out of the ordinary, but everyone involved was relieved once the pooch was rescued. 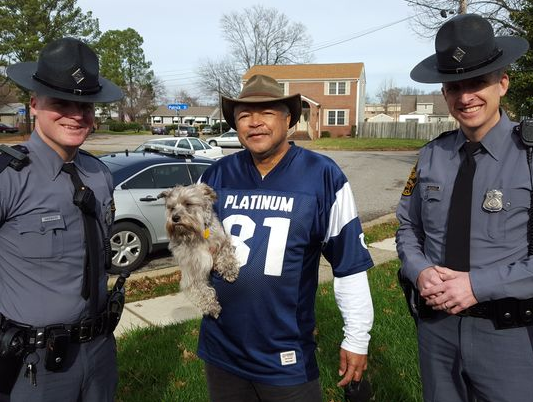 According to 13 News Now, Pinta was first seen on I-64 Eastbound in Hampton at LaSalle Ave. Rescuers at first chased the dog on their vehicles, but once they reached I-664 the chase was done on foot.

“He didn’t want to stop for us,” said Trooper Hagwood. “He kept going around in circles, going the wrong direction on the interstate, running between cars.”

The dog was corralled on the side of the road and picked up by one of the troopers. Thanks to the ID tags the dog was wearing, Pinta was identified and reunited with his owner Jeffrey Corbin.

Mr. Corbin was very glad to have Pinta back in his arms