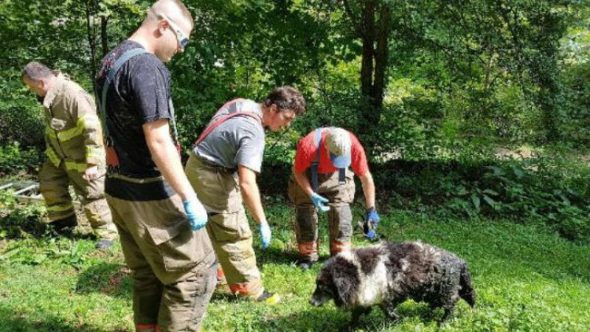 Think you had a bad day? We assure you, it probably wasn’t as bad as this pup’s!

Wednesday morning, a West Virginia dog found himself in quite a putrid pickle when he fell into a septic tank!

Luckily, when the dog’s distraught family called, the Loudendale Volunteer Fire Department and volunteers at the Davis Creek department worked together to get the dog out.

With a rope and some man- (or perhaps woman-) power, they were able to pull the dog to safety after he’d spent about 20 stinky minutes in the muck.

Happily, no injuries were sustained, WSAZ reported. All he needed was a good bath.

Our guess is he’ll need more than one!

And if you don’t believe you can’t find anything on the Internet, read on! We found this hilarious “septic tank warning poem” on a site called Three Chickens and a Boat. The poem is credited to the site owner’s “totally awesome grandma, E. Delahaye.”