Seattle resident Greta Pittinger’s heart stopped when she came home on Dec. 16, 2015, and found her home broken into. The thieves took jewelry and electronics, but what broke the woman’s heart was that her sweet Pit bull named Macy was taken too.

“To steal a dog, I mean, I can’t even imagine why someone would do that,” Pittinger told KING 5 news.

Luckily, four days after starting a massive Facebook campaign and plastering “lost” fliers all over town, Macy was found and returned home. 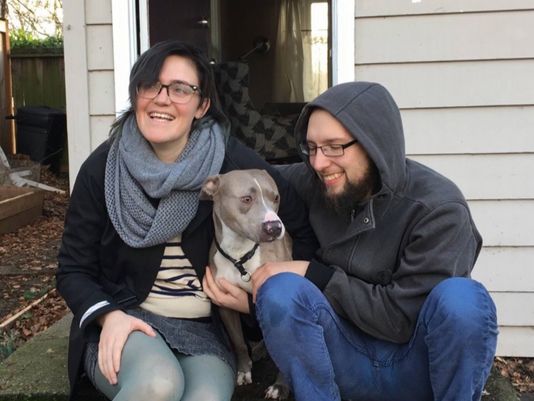 Elizabeth Resendiz who lives 14 miles away from Pittinger’s home found the Pit bull running lose in a park. She recognized the pet from the shared Facebook posts and scared the dog would run into traffic and get killed, Resendiz picked up the 40 lbs. pooch and carried her home.

“I took off my jacket hoping Maci wouldn’t bite me and I wrapped my jacket around her because she looked very scared and cold,” said the rescuer. “But Maci was actually very obedient.”

The kind woman contacted Pittinger, gave her the good news and arranged to have Macy get back home where she belongs.

Macy’s owner is forever grateful that a kind stranger helped the dog get out of harms way and back home. “I owe so much to her,” said Pittinger. “As soon as I got Macy home, she ran to my husband and just curled up in his arms. And has been by our sides ever since.”