Well most of us already know a lot about Titanic and each and every detail associated it, this is something that dog lovers will love. The tragic movie featuring Leonardo Di Caprio tragically explained everything. However, very few of us know that there were at least 12 dogs in that ship on that day. Some say that there were more and they were listed as cargo and the records got lost obviously. 3 of 12 dogs managed to survive the shipwreck and there were 2 Pomeranian and 1 Pekingese 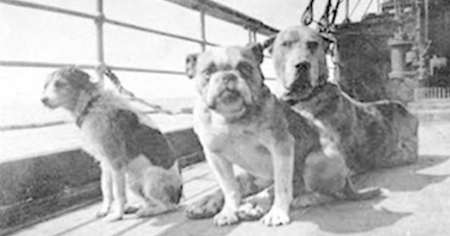 There is even a photo of the dogs on the ship to prove their presence. Also, the ship captain, Capt. Smith was also photographed with his dog named Ben. He was later returned to Captain’s daughter after spending a day on the ship.

One touchy incident showed that 50-year old Ann Elizabeth Isham had a great Dane as she visited her daily. When she was seated in a life boat and told that the dog was too large to fit in, she exited the boar. Her dead body was found days later, clutching onto her beloved dog in the icy waters, both of them had passed away while hugging each other. 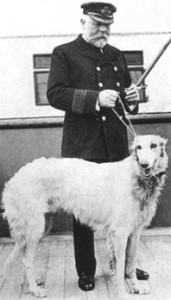 It is interesting to note that only first class passengers were allowed to bring dogs on the ship and the list includes Helen Bishop and her Toy Poodle named Frou-Frou. Among others, there was millionaire John Jacob Astor and his Airedale named Kitty. However, we cannot possibly imagine being in the situation and having to make a decision to let go of your dog or to die saving them. The story of Titanic is known almost to everyone but what happened to the dogs is not common knowledge.