Ramsez, a two-year-old Husky rescued off the streets of England suffered from chronic diarrhea when he arrived at Dogs Trust Canterbury. Vets weren’t sure what was causing the dog’s stomach issues, but after performing surgery, medical staff discovered Ramsez’s problems were due to a 6 in. teddy bear he had swallowed. 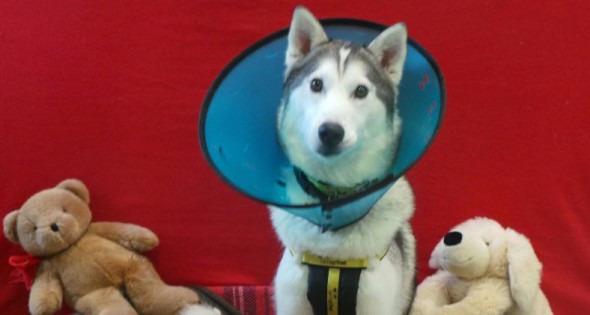 When he first arrived at the shelter, staff performed various tests to get to the root of the dog’s tummy problems, but all exams came back inconclusive. An x-ray revealed there was a blockage in the dog’s stomach, but it wasn’t until the surgery that rescuers learned the real cause of Ramsez’s problems.

No one knows for sure if the former stray ate the bear out of hunger or if it was a simple playful accident. One thing is for sure though, Ramsez loves teddy bears.

Since being rescued from life on the streets, the bear-eating dog has recovered from his surgery and has been adopted. He is now safe in a loving home and has new teddy bears to play with, however he is closely supervised while playing with stuffed animals.