In many Latin American countries street dogs are overlooked by locals and authorities alike. Rarely do these unfortunate beings find the loving hand of a human, a meal or a safe place to rest each night, but the world is changing and strays are being helped by caring individuals more than ever before.

A Labrador mix from Ecuador found himself the victim of a car collision yesterday when he was hit as he attempted to cross the street. Injured and limping, the unnamed dog crawled to a sidewalk and lay there hoping for the pain to go away or for a miracle to take place. 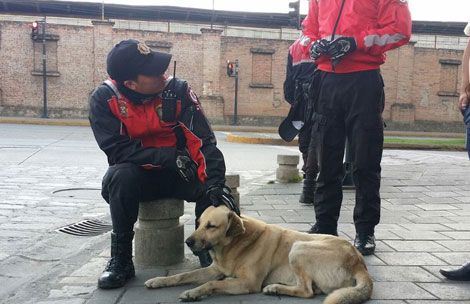 The miracle happened when two policemen noticed him and instead of leaving him there to his own fate the men offered the dog emergency care and later transported him to a veterinary clinic.

The officers who could have gone on with their day and ignored the stray instead approached the animal and investigated the seriousness of the injuries.