In 2015 two very special animals came into Janell Jensen’s life. The Idaho native has a soft spot for differently-abled pets, so when a neighbor found a three-pound Chihuahua on a busy road, she brought him straight to Janell.

Within months, the lifelong animal lover also found herself caring for a special needs lamb. Paddy the dog and Lily the lamb shared an immediate bond, but sadly their beautiful friendship would be short-lived. 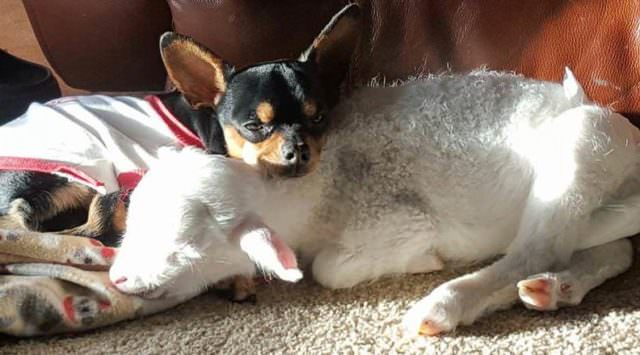 When Paddy arrived, he was underweight and kept falling over, causing Janell and her husband, David to wonder if he had been hit by a car while trying to cross the four-lane roadway. They took him to see their vet, and while he did not have any injuries, X-rays revealed a disc issue in his neck and malformed joints in his legs. Thanks to a healthy diet and lots of TLC from the Jensens, he began to grow stronger. 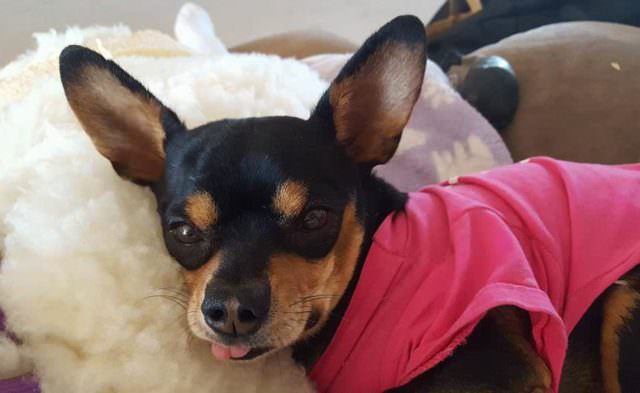 Soon after, their vet contacted the couple to see if they would be willing to take in a special-needs lamb. Lily was the smallest of a set of rare triplets. Crowding in the womb prevented her legs from developing correctly and she was born disabled. Her mother rejected her in favor of her healthy siblings. 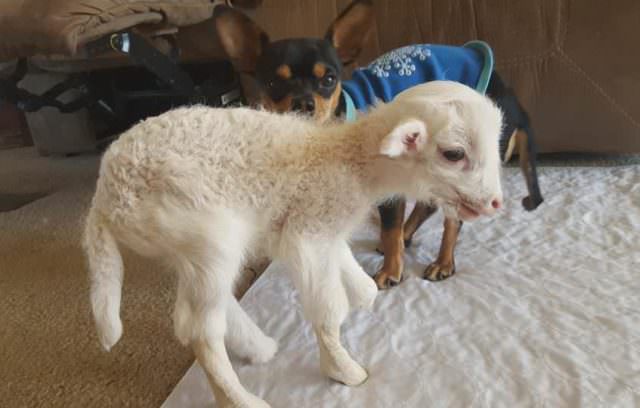 The Jensens’ vet attempted to care for the little lamb, but the demands of round-the-clock attention and bottle feedings proved too much on top of his busy schedule. In a final effort to avoid euthanizing Lily, the vet made a call to Janell who immediately agreed to take her in. 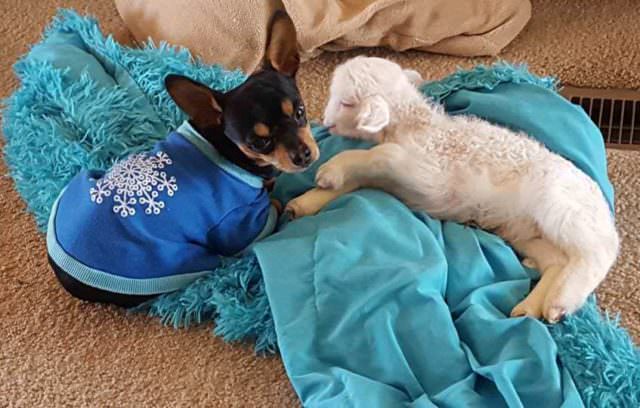 From the start, Paddy formed an attachment to the special lamb with disabilities so similar to his own.

“When we adopted Lily, Paddy took her under his wing right away and became her official face washer after each and every bottle of lamb’s milk, which at first was every hour,” Janell told iHeartDogs. “He snuggled with her to keep her company. She was HIS baby lamb. Lily would also walk over to Paddy and snuggle up to him…they loved each other…they were VERY close.” 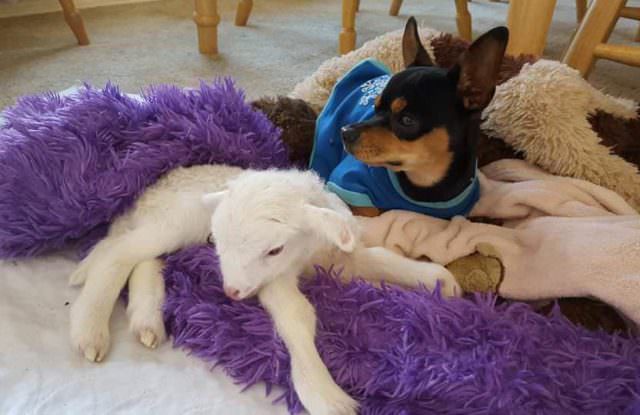 After four months, Lily’s weak, malformed legs were no longer able to support her rapidly growing body. The Jensens had her fitted with a special pink wheelchair, and when she became too heavy for them to pick up, they built her a lift. 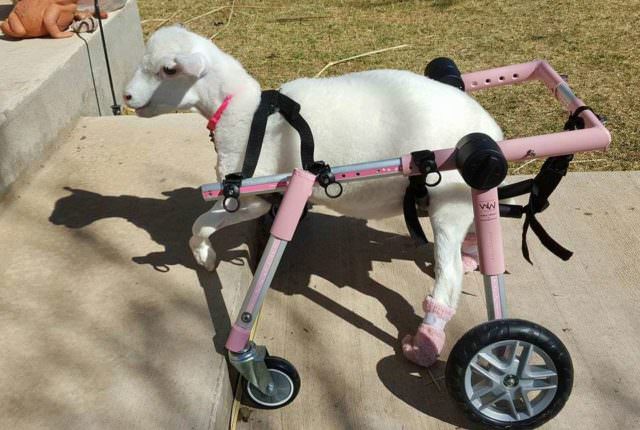 Despite their 24 hour care and endless efforts, Lily lost full use of her legs at 15 months of age. No longer able to stand for a diaper change or pull herself along in her wheelchair, Lily became bedridden. As a final gift of love to the lamb she adored, Janell made the heart-wrenching decision to have her humanely euthanized. 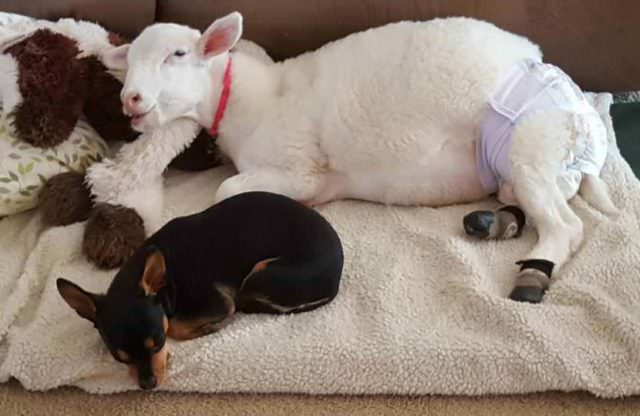 As the Jensens mourned Lily’s loss, they noticed that Paddy was also suffering. Despite special attention from Janell and David, the little Chihuahua missed his friend. In order to help him heal, Paddy’s Auntie Carol sent him a plush stuffed Lily to snuggle with. The moment Janell opened the box, Paddy grabbed his new “Lily” and brought it into his “man cave” (crate). 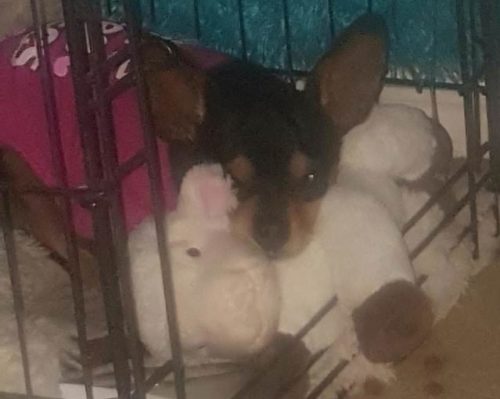 Although the entire family still carries Lily in their hearts, they have managed to move on. Paddy adores his humans and has a blast romping with his two canine brothers, Whiffers and Scruffy. The dogs have a basket full of toys, but Paddy’s special Lily toy stays inside his crate where he can cuddle with it anytime he starts to miss his lamb BFF. 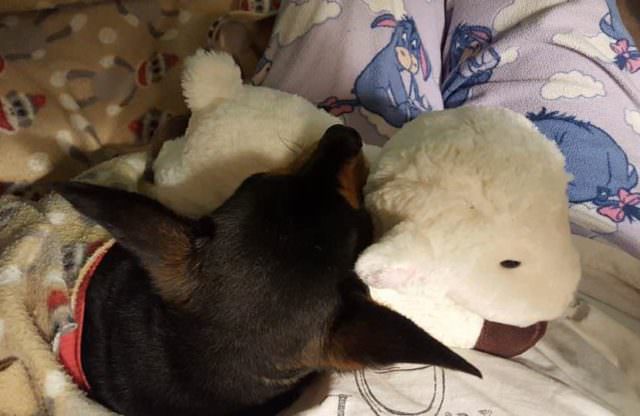 Janell and David Jensen currently have 14 horses – 4 Standards, 5 Minis, and 5 Dwarf Minis – a dwarf Hereford cow, 2 goats, 2 alpacas, a sheep, 4 banty hens, and 3 dogs. Many of the animals they have cared for over the years have had special needs. 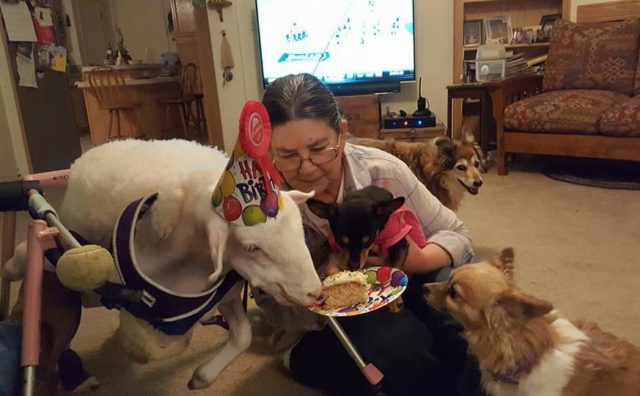 Janell acknowledges that caring for disabled pets can be difficult and time consuming, but for her, the reward of saving a life far outweighs the struggle. Lily only had 15 months on earth, but thanks to Paddy and the Jensens, each day was filled with joy and love.