George H.W. Bush‘s faithful service dog Sully has remained by his side, even after the 41st President of the United State’s passing on Friday.

A photograph of Sully lying by Bush’s flag-draped coffin along with the caption “Mission complete” was shared by Bush’s spokesman Jim McGrath on Twitter. 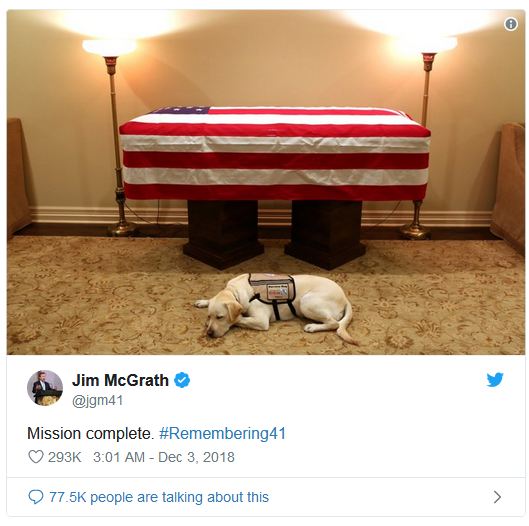 “A great joy to welcome home the newest member of our family, ‘Sully,’ a beautiful — and beautifully trained — lab from @AmericasVetDogs,” Bush wrote on Twitter at the time. “Could not be more grateful, especially for their commitment to our veterans.”

Sully accompanied Bush where ever he went. He was trained to retrieve dropped items, open and close doors, push an emergency button and support him if he had to stand up.

Sully was raised and trained by America’s Vet Dogs and named after former airline pilot Chesley “Sully” Sullenberger, who safely landed a plane on the Hudson River in 2009