Chachi has had quite the adventure!

The 3-year-old Chihuahua was with his dad on a road trip to Northern California last month (along with two dog siblings) but along the way, Chachi got himself lost. 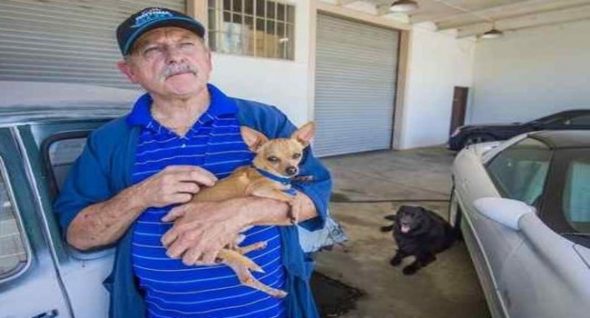 Owner Bill Wackerman, 70, was desperate in his search. The region is rife with coyotes, hawks and mountain lions, any of which could easily have claimed Chachi as a meal.

The family was on their way back to Yucapai in their motorhome when Wackerman realized, just an hour from home, that four-pound Chachi was not with the group. Sugar, his other Chihuahua, and Bear, the Newfoundland mix, were safely on board. Where Chachi got separated from the group was not immediately known.

It had to have been somewhere along Highways 395, Wackerman surmised, so they turned the RV around and headed back north, figuring that somewhere along the five-hour trek, he’d recognize the various places they’d stopped for the dogs to get in a walk. The backtracked in various places, searching high and low. The first day, it was a 10-hour ordeal.

Wackerman kept driving, eventually pinpointing the rest area he was sure Chachi made his escape, talking to potential witnesses, but to no avail. Eventually, the family headed back home to Yucapai, exhausted, they had a few contact numbers in tow from folks they’d spoken with at the rest area.

“I was up 36 hours that day,” owner of Calimesa Swiss Services, manufacturers of aerospace and medical parts, told the San Bernadino Sun. “Your mind goes through all kinds of scenarios,” he added.

Meanwhile, Chachi was loose in Inyo National Forest, where there are wondrous places for an adventurous pup to explore, but one fraught with danger. He would be a tasty little morsel for large carnivores and swooping birds of prey.

“It’s a miracle he escaped those animals,” Wackerman said.

The next day, Wackerman received a call from a hiker who had spotted Chachi, but when the man tried to catch the elusive dog, Chachi ran onto the busy highway. He avoided people, and would take off running, keeping to the low underbrush, hanging out under logs.

The chances of his recovery seemed slim, but then, a miracle happened.

The successful return of little Chachi included help from the U. S. Forest Service, a local camper, a former housekeeper, Mono County Animal Control, a veterinary hospital, a passing motorist and a Rest Area attendant.

Mike Sidlin, A U.S. Forest Service employee, was the hero of this tale, catching Chachi and taking him to a veterinary hospital in Mammoth.

Chachi was dirty, skinny and exhausted — and, his rescuers reported — still loaded with Chihuahua attitude!

Wackerman, of course, was delighted! And as fierce as he’d been in the forest and with rescuers, the little pup is a docile lap dog in the arms of his daddy.

“You could see all Chachi’s ribs,” Bill said, so he took his sorely missed pup to McDonald’s for some Chicken McNuggets.

“We don’t usually do that,” Bill explained. “He scarfed ‘em up!”

Chachi was delighted to be back in Daddy’s arms.

“He’s always been a pest,” Bill said with affection, “He had to be a tough guy to last.”

It took a good week for Chachi to look normal again, and now he’s up to his fighting weight of four pounds.

Chachi still has a little separation anxiety and doesn’t like his dad to be far from him.

“You know, we should start playing the Lotto — Chachi is a lucky dog,” Bill said. “I got emotional.”