When a logger working in a remote stretch near Conway, NH, saw an old, disoriented dog wandering in the woods, he called the Conway Area Humane Society, concerned the dog had been abandoned.

Their team of rescuers, including the shelther’s operations manager, Debra Cameron and volunteer Kevin Ahearn, headed out to meet the caller — Jake Higgins — so he could lead them to where the dog had last been seen.

“Thankfully, Jake knew the trail he had seen him taking and brought us right to it,” Cameron told The Dodo. “We just happened to get there in time to see a flash of the dog’s tail before he headed down a slope.” 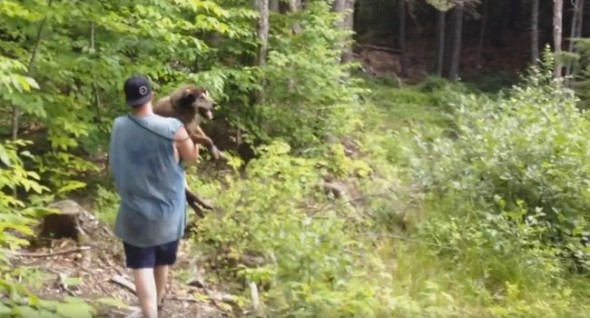 The dog, a shepherd mix, was old. Disoriented. Exhausted. When they whistled to him, he simply sat and waited for them.

“He was as sweet as a pup can be,” said Cameron.

She captured this video of their rescue efforts, including the gentle dog being carried to safety. Of course, they had no idea how he’d come to be there and for how long, but his story would slowly unfold.

Shortly after the above video was posted on the Conway Area Humane Society’s Facebook page, their mystery dog was recognized.

His name is Rocky. He is 17 years old. He has cancer. And a family who missed him very, very much. 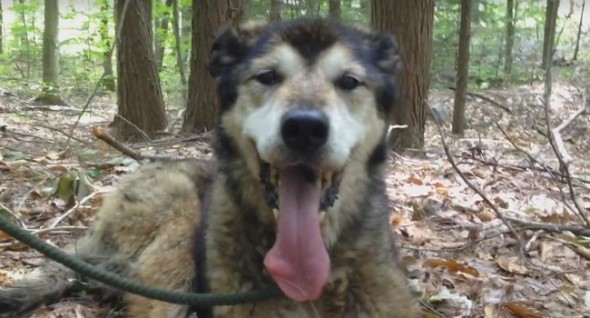 Rocky had run away over July 4 weekend, when fireworks had sent him running into the woods, fueled by panic. He vanished. Thanks to the call from Higgins and the subsequent rescue, Rocky and his dad were reunited on Friday.

“They were so grateful,” said Cameron. “Rocky’s dad is a very nice man. He gave us a $100 donation when picking him up this morning. He has helped other people locally search for lost pets and is an avid dog lover. It was such a relief to learn Rocky was his and such a loved pet.”

Happy endings: in dog rescue especially, they are an exceptionally wonderful thing. 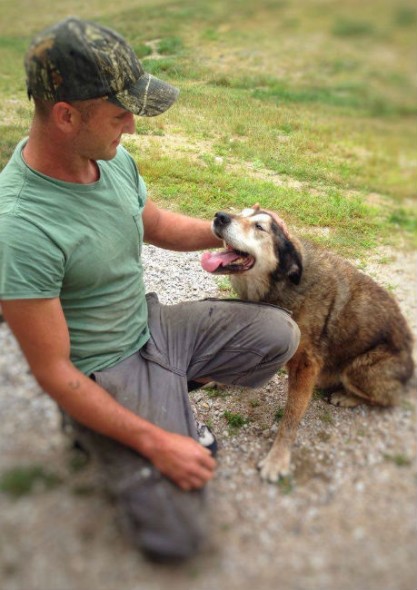