Venus came to the Muttville Senior Dog Rescue in San Francisco when her elderly owner could no longer take care of her. Volunteers here have no idea how such a sweet girl hasn’t been adopted yet, but she is the last of a list of about 70 dogs who have been with Muttville for several months … maybe your home is the right forever home for her!

Caregivers say this 7-year-old girl is a tad timid at first, but once she warms up, she’s a total lovebug — a lap dog and a big-time cuddler. She weighs about 12 pounds; you can carry her anywhere!

“Venus is initially pretty shy around new people, but warms up significantly with some yummy treats. It took her a few days to feel comfortable at home, but she’s blossoming a bit more each day! She gets along great with other dogs, can do the stairs like a champ and loves to burrow under blankets. Venus enjoys going for walks/going to the park and is 100 percent house trained. 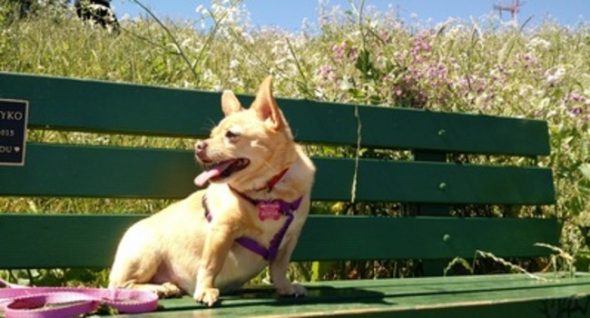 “Venus is a fantastic little doggie – rarely barks, very active and gets excited when her leash comes out! She sleeps on her doggie bed in my bedroom quietly all night long. She has good doggie manners and has been a great guest at my house – she has a laid back personality and goes with the flow. Mostly she hangs in her bed or on the couch and when I leave she goes right to the little gated off dog area in my kitchen without protest. I take her out at least twice a day and try to do 3 miles with her. She is a champ and easily can keep up. She also gives kisses and when I come home she gets really excited and wags her tail fiercely! She is immediately fine with all dogs and lived with a cat in the past.”

It was a record July at Muttville — 94 oldsters adopted!! Let’s help Venus become one of their August success stories!

The folks at Muttville asks potential adopters to meet their dogs first in San Francisco, to ensure it’s a match!