You may not think that the North Shore Animal League and Riker’s Prison would have much in common, but these days they do. In a new program, one of several that are cropping up around the country, rescue organizations are teaming up with correctional facilities and having amazing results for both the inmates and the animals. 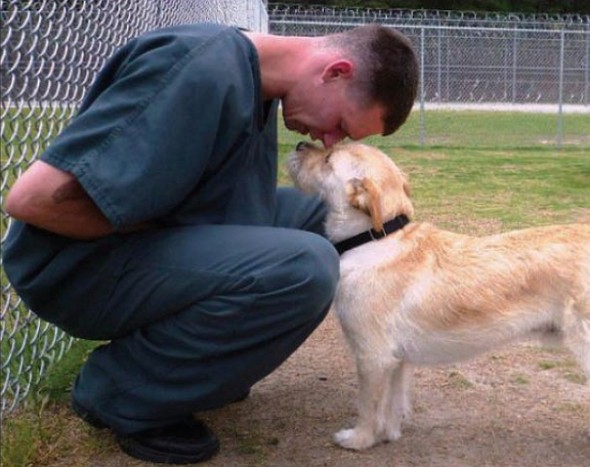 According to Fox News, the youth involved in the new program are between the ages of 16 and 17 who have been arrests, are not able to make bail, but also have not been convicted or sentenced.  They are in a purgatory, of sorts, and on the precipice of dropping back into society either having made changes to they way they want to live their lives or not.  The teens involved in the program have been hand-picked and work with a professional dog trainer.  They are fully responsible for the daily care, feeding, exercising, and training of the dog with which they are working.  Each dog, too, has been carefully selected to participate.

Winette Jackson, Correction Department Deputy Commissioner, shared with Fox News that she has witnessed positive changes on multiple levels and that the benefits of this program extend far beyond the barbed wired that encloses the participants. No major violent incidents have arisen and, to date, eight of the dogs that have been trained by the teenagers have found homes.

A similar program, following six months of coordinating efforts, is being operated in Amarillo, TX.  The Amarillo-Panhandle Humane Society has moved two dogs to the Youth Center of the High Plains to be a part of a program called Unlocking Hope.

Take a look at the video: Youth Center of the High Plains video

Joe Barton, Chief Juvenile Probation Officer for Randall County, told MyHighPlains.com, “They’re learning to be responsible. They’re learning to open up and trust. They’re learning to show care. It’s a very experiential, real-life set of skills that they can parlay over to people in their community.” Executive Director of the Amarillo-Panhandle Humane Society, Jena McFall, echoed those sentiments saying, “The whole point of this was to you know create a human, animal bond and they don’t judge at all. They love you unconditionally. They are always happy to see you and those kids need that,” adding they had been looking to create this kind of program for some time.

With programs of this nature coming online throughout different communities, lives are changing.  It is about self-worth, respect, caring, dignity, and knowing that you can make a positive difference in someone else’s life.  That is true for both the humans and animals involved.